Fuel Consumption Computation to Optimize the Trajectory of Aircraft 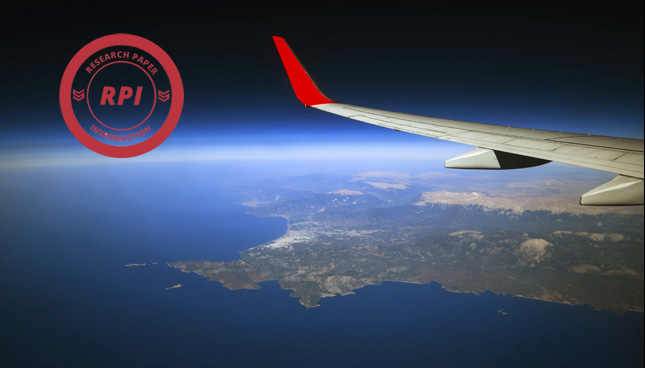 Fuel consumption of aircraft needs to be reduced to obtain greener flights. The aeronautical industry has set the goal of reducing their CO2 emissions to 50% of the level recorded in 2005 by the year 2050. Another important emission to be considered is NOx which, when at high altitudes, is depleting the ozone layer. These environmental justifications for designing aircraft and systems that reduce fuel burn are compounded by the high costs of fuel. Researchers from the École de technologie supérieure (ÉTS) have developed a methodology to evaluate the amount of fuel burnt for different flight trajectories.

In order to sustain a given flight, high quantities of fuel are required to power engines. Airlines expend around 25% to 36% of their total budget in fuel to power their flights. It is of interest to reduce fuel requirements due to economic and environmental reasons. Fossil fuel burn releases pollution emissions, such as carbon dioxide (CO2) that is known to contribute to global warming, oxide nitrates (NOx) which deplete the ozone layer, and hydrocarbons, which under high exposure are linked to pulmonary problems.

Flight reference trajectory optimization is an option to reduce fuel consumption and further contribute to greener flights [1]. Before implementing algorithms and strategies to aboard the fuel reduction challenge via flight optimization, it is important to have a fuel burn model. Depending on the interest of the research, different models exist in the literature. The complexity of a model depends on its available inputs and required outputs. Evidently, research focusing on a conceptual aircraft development uses a different model than research focusing on a new generation of engines design. The fuel burn model used in flight optimization can be separated following two main trends: managing the aircraft as a mass particle using a given Specific Flight Consumption (SFC) coefficient, and those using a numerical performance model, such as the one used by the Flight Management System (FMS).

The FMS is a device that, among other tasks, controls the aircraft thrust, manages the flight plan, and optimizes the flight trajectory of reference [2]. Because of its low power computation capacity, the fuel consumption needs to be quickly computed with good accuracy in order to develop flight reference trajectory optimization algorithms. This is the reason for using numerical performance models under the form of a database.

The Numerical Performance Model consists in a set of tables that provide as output the fuel consumption, the horizontal travelled distance, and in some cases the required altitude to execute a given flight phase. These outputs are provided for each flight phase as shown in Table 1.

Table 1 Inputs and Outputs for each Flight Phase 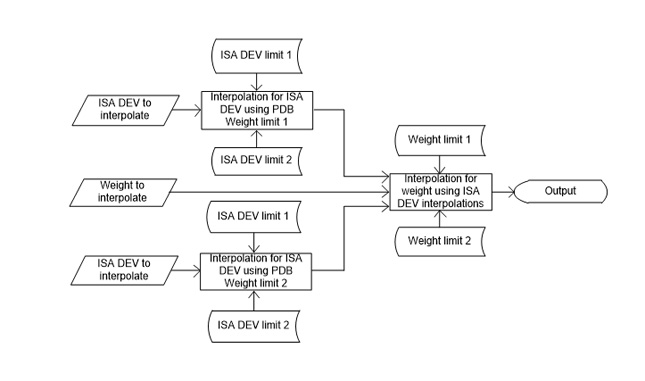 The methodology developed at the Laboratory of Applied Research in Active Controls, Avionics and AeroServoElasticity LARCASE for computing the flight cost took into account the particularities of each flight phase. For example, during climb, the aircraft changes its speed reference from the Indicated Air Speed (IAS), to the Mach number at a given altitude. Interpolations between different tables are required to compute the cost of a given IAS/Mach climb schedule. Another example of tables switching is for the interpolations for the fuel requirements during accelerated or decelerated climb or descent phase; the fuel burn computation begins with the acceleration/deceleration tables, and once the required speed is reached, this computation is finished with the IAS climb/descent table.

This methodology is able to compute the change of altitude during cruise (step-climb). To perform this computation, this methodology requires the use of two different tables: Cruise Mach and Climb Mach.

The methodology here presented was implemented, and its flight cost was compared against the flight cost obtained by using the commercial flight simulator (FlightSIM®) having its complete aircraft aerodynamic model. Figure 2 and Figure 3 provide the fuel burn and the flight time difference expressed in terms of relative errors. 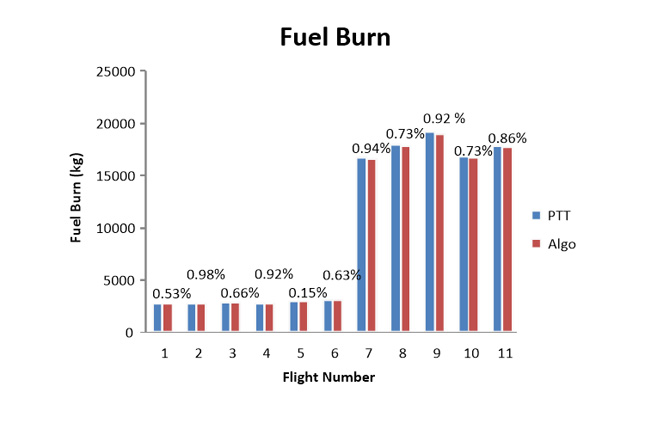 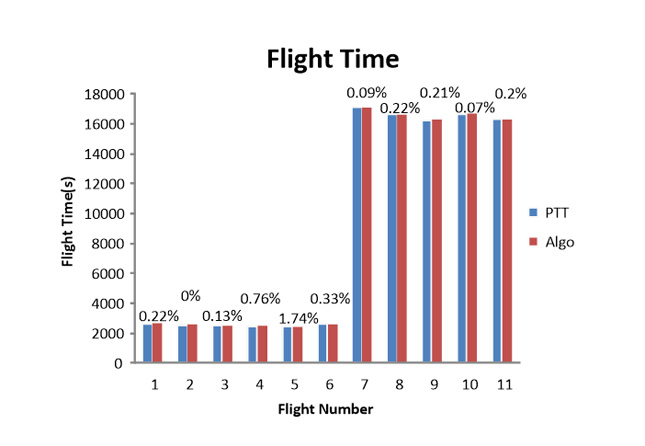 As seen in Figures 2 and 3, the methodology developed was able to provide results similar to commercial available tools; this methodology can be used as a tool in the flight optimization algorithms.

More detailed information about the methodology followed to compute the flight cost can be found in the journal article entitled Methodology for Vertical-Navigation Flight-Trajectory Cost Calculation Using a Performance Database published in the Journal of Aerospace Information Systems by the American Institution of Aeronautics and Astronautics (AIAA)[3].

This research was conducted at the Research Laboratory in Active Controls, Avionics and Aeroservoelasticity (LARCASE) and was funded within the Business Led Network Center of Excellence GARDN to encourage Greener Aircraft Technology Achievements in Canada.  Some optimization algorithms, and fuel burn approaches developed at the LARCASE at ÉTS can be found in [4-18].

If anyone would like to collaborate on this research, or on any other research project at the LARCASE, please visit the website and do not hesitate to make an appointment with professor Botez and her research team.