Jérémy Brossard Author profile
Jérémy Brossard began a PhD in electrical engineering at the ÉTS, in January 2016. The subject of his thesis is to extend the performance of a control method patented in 2015, the B Control for quadcopters, to improve performance.
Program : Electrical Engineering 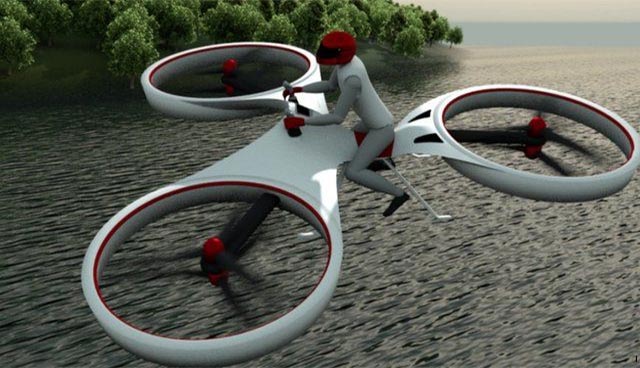 At the end of last November, the 7th edition of the Big Boys Toys world event was held at the ADNEC (Abu Dhabi National Exhibition Centre). This luxurious show displays companies’ latest technological innovations. Among the most surprising inventions, we discover the Flike tricopter designed by engineers at the Hungarian Research Institute. This flying motorcycle, which is still at the prototype stage, is enough to be the envy of Star Wars admirers as it eventually would allow one to get around like the Podracers in Episode I: The Phantom Menace.

The Flike concept consists of six carbon composite rotors, grouped in pairs on three shafts, whose twin blades turn in opposite directions. Located at an equidistance around a circle, two sets of rotors are at the front and one set at the rear. Each motor is electrically powered by lithium polymer batteries, which according to the researchers permits a flight duration of between 15-20 min in hover mode and 30-40 min in cruise mode.

This 240 kg (530 lb) flying motorcycle can carry a maximum load of 100 kg (220 lb). It was designed to reach a maximum speed of 100 km/h (62 mph) and an altitude up to 30 m (98.4 ft.), which seems high enough since the machine does not have a cabin. In case of an engine malfunction, the other engines have sufficient power to maintain lift for the duration of an emergency landing.

As shown in the video below, some improvements remain to be made before being able to fly Star Wars style. First, the lack of agility and difficulty moving along a trajectory suggest that adjustments are necessary in propeller rotational control.

Furthermore, in terms of safety, being surrounded with rotating propellers seems rather frightening. Nevertheless, existing images of the future prototype suggest shielding around them while not completely blocking accessibility.

The major attraction of this technology is being able to get around above rough terrain, in hard to access areas, with much more ease than conventional means of transport such as car or motorcycle. The ability to shorten trips by flying over land without roads presents a clear advantage to respond to emergencies with residents in remote areas, for example. The distances covered by border patrol officers could also increase significantly. Moreover, the use of this mode of travel could easily stimulate our imagination, whether it be for leisure, racing, or exploration…

While the prototype still needs development, the Hungarian company has nevertheless taken many orders. This new technology is still subject to unclear regulations, but as in the case of drones, undoubtedly safety rules will be adopted. Indeed, a special pilot license for this type of aircraft has already been mooted. To acquire a tricopter, in addition to complying with regulatory requirements and showing lots of courage, you will have to pay about 100,000 USD. We will need to wait a bit longer before witnessing the mass marketing of flying motorcycles, but quite frankly let’s recognize that this bodes well for a very interesting future!

Jérémy Brossard began a PhD in electrical engineering at the ÉTS, in January 2016. The subject of his thesis is to extend the performance of a control method patented in 2015, the B Control for quadcopters, to improve performance.