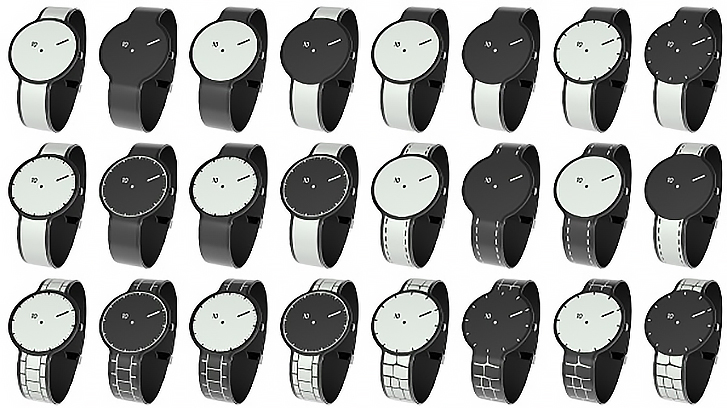 The market for connected watches is currently booming. Apple Watch, Samsung Galaxy Gear and many more are all leading a technology race to impose their vision of “a smartwatch”. The new Sony Fes Watch, however, is taking a different road.

The Fes Watch is mostly made by electronic paper (e-paper)…which allows it to change its appearance!

E-paper is a display technology that mimics the appearance of real paper and works by reflected light, taking very little power to display a static image. Fes Watch offers about 60 days of usage.

The Fes Watch, with its 24 design patterns but minimalist, is capable of changing how it looks depending on the gesture of its user. Relying on the chameleonic flexibility of its appearance and the design chosen by its creators, this watch looks different.

Fes Watch, first appeared on a Japanese online crowdfunding where it has surpassed the campaign’s initial goal by collecting 2 million yen ($20,000 in Canadian dollars) after just three weeks.
The FES Watch is not the only e-paper implementation the Fashion Entertainments (a Sony sub-division) is testing. They are planning to develop other accessories such as shoes, bow ties or sunglasses.

For the moment, Sony has not given an official launch date. The watch is still a prototype but we could expect it for 2015.