Last November 25, professors from the École de technologie supérieure (ÉTS) of Montreal, Guy Gauthier and Maarouf Saad, presented their research work on exoskeletons. The following article summarizes the second part of the presentation, by Maarouf Saad which involved the use of an exoskeleton for rehabilitation of the upper limbs. An article published recently presents Guy Gauthier’s lecture on: Rehabilitation of the lower limbs with a robot.

Several current exoskeletons for upper limbs have significant limitations regarding the number of degrees of freedom and range of motion when compared to human upper limbs. In addition, they are bulky and do not provide any mechanism to compensate for gravity or to ensure user safety. Mechanical joints are weak and their transmission mechanisms are very complex. Their support completely encircles the arm. They are also limited by the control approaches they use.

In order to reproduce the full range of upper limb movements of the human body, an exoskeleton should have seven degrees of freedom and enable complete anatomical range of motion.

Elbow movement has only one degree of freedom:

Similarly, forearm movement has only one degree of freedom:

Whereas the wrist joint movement comprises two degrees of freedom:

The ÉTS-MARSE (Motion Assistive Robotic-Exoskeleton for Superior Extremity) is an exoskeleton robot developed at ETS and is capable of providing different types of therapy and rehabilitation with seven degrees of freedom. It also has control commands that permit active and passive treatments.

Biomechanical studies of the human upper arm have been conducted to establish the upper limb parameters such as arm length, mass of limb segments, joint articulation and range of movement. Subsequently, simulations were carried out to assess the moment and forces acting on each of the joints in order to determine actuator selection.

This exoskeleton robot is designed to provide a wide range of motion and an excellent power to weight ratio. It is easy to wear and remove besides efficiently supplying gravity compensation. 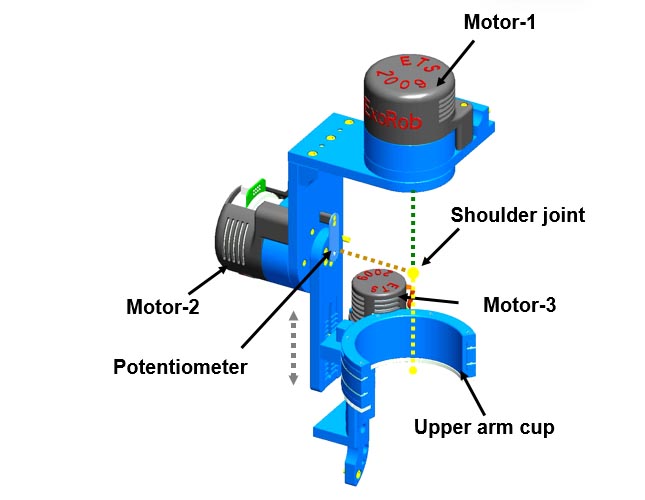 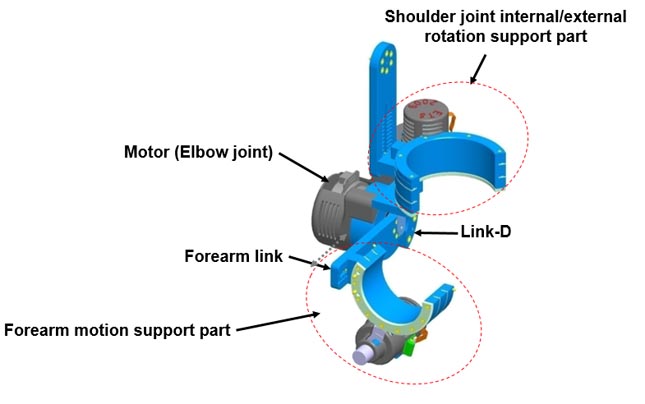 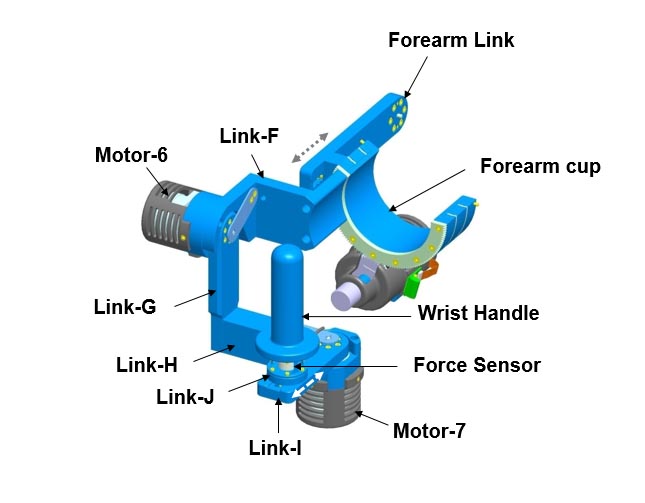 Passive mobilization therapy is the first type of physiotherapy treatment given to patients to improve their passive range of movements. In this therapeutic approach, the patient keeps his/her muscles relaxed while a physiotherapist, a specialist or a trained family member moves the patient’s limbs. A library of passive mobilization exercises following the recommended protocol was set up. The results of experiments that we have conducted showed that ÉTS‑MARSE can effectively perform passive mobilization exercises for shoulder, elbow and wrist joint movements.

In addition to providing therapy to more patients, the use of this exoskeleton robot could potentially enable remote rehabilitation treatment.

ÉTS-MARSE is ready to be tested with actual patients. The partner in this research expects to use it soon at the Center for Interdisciplinary Research in Rehabilitation of Greater Montreal. In addition to allowing the treatment of more patients, the use of this exoskeleton robot could potentially enable remote rehabilitation treatments.