Spending Time in the Cradle of 4.0: Technological Mission Germany 2019 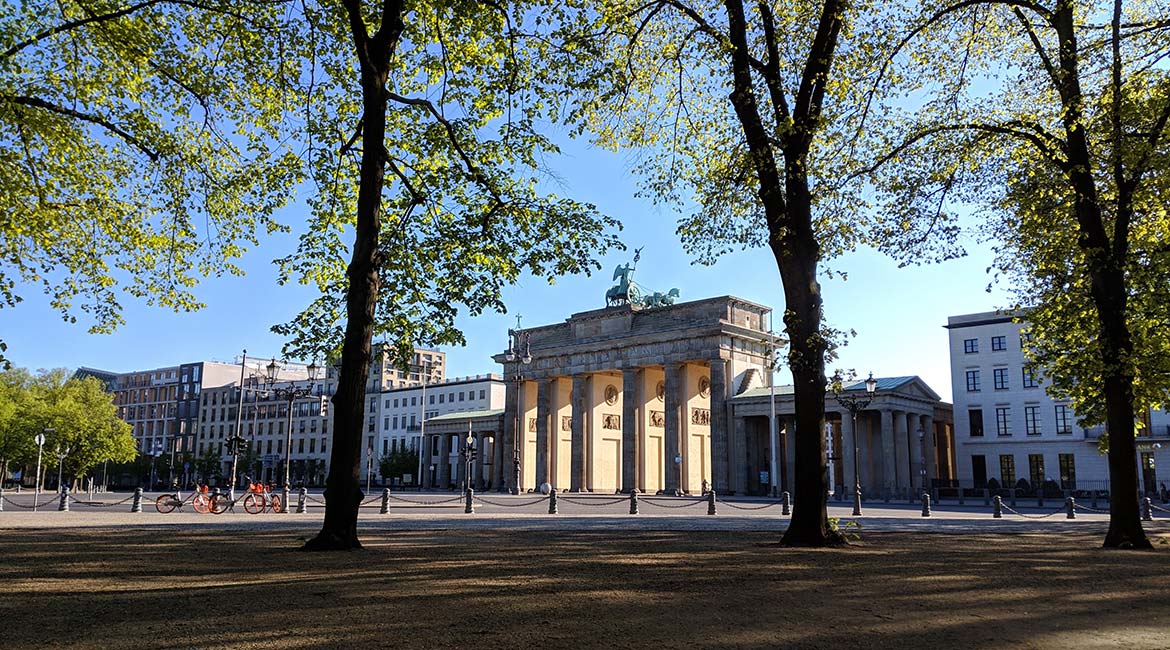 The Brandenburg Gate: both massive and iconic. License CC 3.0.

Future engineers will need to master not only technical and scientific know-how, but also skills that will allow them to work easily in a global economy, within multicultural and interdisciplinary teams.

Since 2012, ÉTS technological missions abroad have helped engineering students acquire new visions in terms of industry, technology and university research, in countries where ÉTS maintains a number of collaborative relationships. Students selected from different disciplines—mechanics, construction, electrical, software and information technology, logistics operations and automated production management—stand out for their marked interest in engineering at the international level.

During visits to companies and universities in the host country, students discover and learn from different approaches and models in technology, management, innovation, and entrepreneurship, as much in the engineering profession as in interpersonal relationships, and so much more. Past missions in Denmark (2012), Sweden (2013), Germany (2014), United Kingdom (2015), Japan (2016), China (2017), and on the Canada-US West Coast (2018) proved highly successful. In April 2019, the mission went back to Germany, a forward-looking region in various technologies. It was a full schedule! 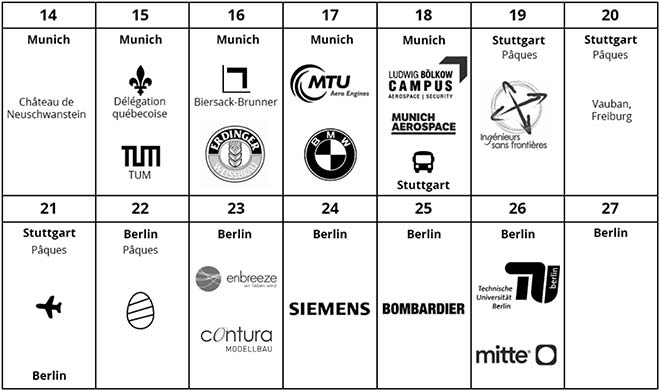 The Reinheitsgebot (“German Beer Purity Law”) is an ancient tradition limiting the number of ingredients in beer to four: wheat, barley, water, and yeast. And although this ancestral law only applies to beer, Germany is very strict on rules. Punctuality and rigour are more than encouraged for engineers, as well as any worker.

A (rather) serious pose in front of MTU Aero Engine offices.

The first visit in Germany was like a ”soft landing”: the Québec Government Office in Munich detailed their activities and areas of operation—economic, cultural, and political—as a bridge between Germany and Quebec. This was followed by a visit to the Technical University of Munich (TUM), attended each year by several ÉTS students for a semester of study.

Our next stop was the small town of Erding in the southern suburbs of Munich, with the construction engineering consulting firm Biersack-Brunner, and with Erdinger Weissbier, the largest white beer exporter in the world, where the Reinheitsgebot rule is strictly followed. The fully automated high-speed production line—including sorting and washing returnable bottles—was fascinating.

The remaining visits were at MTU Aero Engines, a partner of ÉTS looking for interns; BMW and its 1400 robots; and the Airbus Ludwig-Bolkov campus, a cluster of start-ups and research institutes, where cutting-edge technologies were showcased—like 3D printed circuit boards (PCB).

Our arrival in Stuttgart coincided with the start of Europe’s largest spring festival, in the heart of the city and featuring over 250 exhibitors and restaurants. Residents, dressed in traditional costumes, wandered around, day and night—a great introduction to the German culture.

Our entire team took three cars—the only exception to our exclusive use of the first-rate German public transport system—to go to Karlsruhe for a meeting with three Chapter members of Engineers Without Borders of the Karlsruhe Institute of Technology (KIT). Back in Stuttgart, a visit to an urban agriculture centre was an interesting end to the German public holiday.

No weekend for the Mission: on the beautiful Saturday we went to the Vauban eco-district, a pioneer of the genre, with a professor from the University of Offenburg as our guide.

Berlin, the capital of Germany, has a dark history. The people we met described this multifaceted city as one of constant change since the fall of the Wall in 1989, having to deal with problems like skyrocketing prices, but also presenting very interesting opportunities for start-ups. 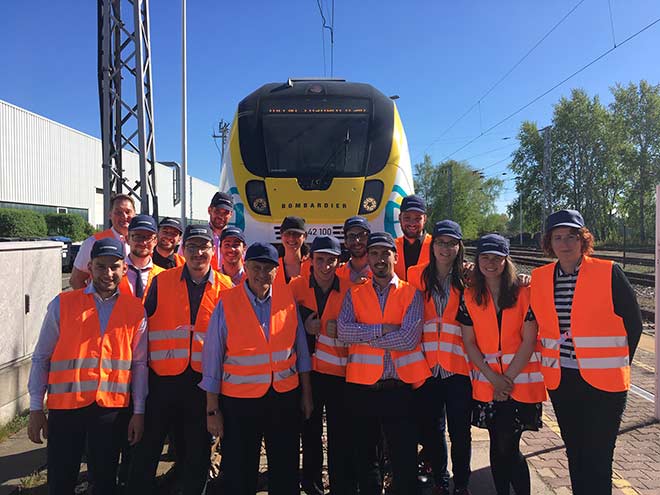 Anyone wants to operate a Bombardier train?

The week began at Enbreeze, a manufacturer of small wind turbines for businesses and farms, which offer several benefits, such as lower manufacturing and installation costs, and lower noise pollution. The day ended at Contura Modellbau, a small agency of 5 people producing prototypes for marketing purposes.

Siemens, the German giant, welcomed us the following day. A short detour through the collaborative workspaces was followed with presentations on Industrial Revolution 4.0, then by a visit to an old gas turbine power plant, now idling as this type of electricity production is slowly disappearing with the increasing popularity of renewable energies.

The second pillar of the week, Bombardier, also has a Transport division based in Germany. After discussions with the director of digital innovation on the impact of digital technology, we visited the plant and the test area. Some lucky people even got to operate a train!

The Technical University of Berlin (TUB) and its downtown campus, brimming with facilities in the aeronautical field, was our start to the last day. No student from ÉTS has ever attended a semester, but this could soon change. Mitte, a very young start-up in Berlin specializing in water purification was our last host. The young, English-speaking and motivated team presented their product, their future marketing plans, and their Silicon Valley culture.

While planning our mission, we were impressed by the German efforts in the green energy sector. From solar panels to wind turbines, to thermal energy collection, all means are being used to save energy. This is why our 2019 Technology Mission team decided to go carbon-neutral by offsetting the emissions caused by our travels. Through Carbone boréal, we purchased 171 trees to be planted in the Saguenay-Lac-Saint-Jean region, contributing to the capture of over 24 tonnes of CO2. The team would like to thank the FDDAÉÉTS for their financial assistance, which brought this initiative to fruition.

See you next year for a mission to a new country with a brand new team! Recruitment begins in the fall semester. Please visit http://missionstechno.etsmtl.ca/?lang=en, and our social networks for more details. Tchüss!

A 5th-year engineering student at UTBM, in France, Pierre Jacquier is a masters’ student in the Mechanical Engineering Department.

Jacob Bouchard-Roy is a masters’ student at ÉTS. He developed skills in instrumentation and energy, his main fields of interest.