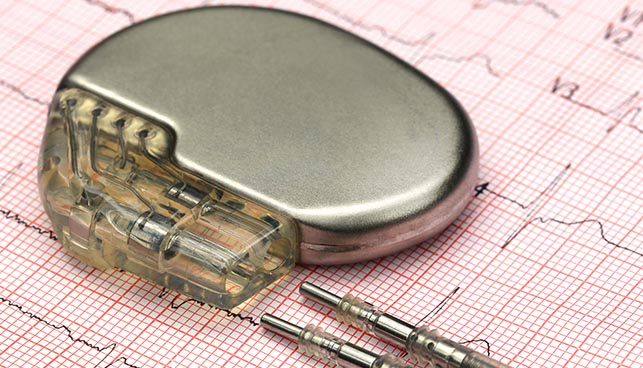 Researchers at the University of California at Los Angeles (UCLA) and the University of Connecticut have designed a device that could make pacemakers and other apparatus safer and more durable. They call this new energy storage system a biological supercapacitor. The system uses charged particles, or ions, released by fluids that circulate inside the human body. This device, compatible with the body’s biological systems, will make it possible to manufacture cardiac pacemakers and other implantable, autonomous and durable medical devices.

The pacemaker is a device implanted in the body that provides electrical impulses to help regulate abnormal heart rhythms. It stimulates the heart muscles, allowing for example to accelerate heart pulses when they are too slow. Pacemakers are powered by conventional batteries, which eventually become depleted and must be replaced. When this happens, replacing the batteries involves operating on the patient. In addition to risks of infection associated with the surgical operation, the batteries contain toxic materials that could endanger patients by leaching into their bodies.

The team created a solution that will allow pacemakers to run without batteries. The device gets its energy from technology that works with biological fluids, such as blood serum and urine. Thanks to a component known as an energy harvester, this technology converts human heat and body movement into electricity, in the same way that self-winding watches are powered by the wearer’s movements.

According to El-Kady, postdoctoral researcher at UCLA and co-author of the study, “The energy harvester can provide the pacemaker—and any other implantable device that should never be replaced—with endless energy.”

The most recent pacemakers are typically 6 to 8 millimetres thick, and have the same diameter as a 50-cent American coin and the battery takes up approximately half of the device’s volume. Since it has no batteries, the new pacemaker is only 1 micrometre thick—thinner than a human hair. It can maintain its performance for a long time, twist inside the body without mechanical damage and store more energy than the lithium-lithium batteries of comparable size currently used in pacemakers.

To be more efficient, battery-free pacemakers must include a harvester capable of capturing, storing and transporting energy. However, existing technology on the market is not fast enough nor powerful enough to run pacemakers. This study consists in designing a capacitor compatible with the human body and capable of efficiently charging the pacemaker.

The concept designed by the team includes a multilayered nanomaterial used as an electrode, and a conductor through which electricity from the harvester passes.

The study sets out an approach to the production of bioelectrochemical capacitors based on compatible proteins using novel nanocomposite heterostructures, in which the two-dimensional graphene oxide sheets are interlayered between chemically modified mammalian proteins. Biological fluids were used as electrolytes. In one experiment, this protein-modified reduced nanocomposite graphene oxide showed no toxicity to embryo fibroblasts in mice.

“This technology can also be used to develop a new generation of implantable devices that can accelerate bone growth, promote healing or stimulate the brain,” claimed Kaner, who is also a member of the NanoSystems Institute of California UCLA.