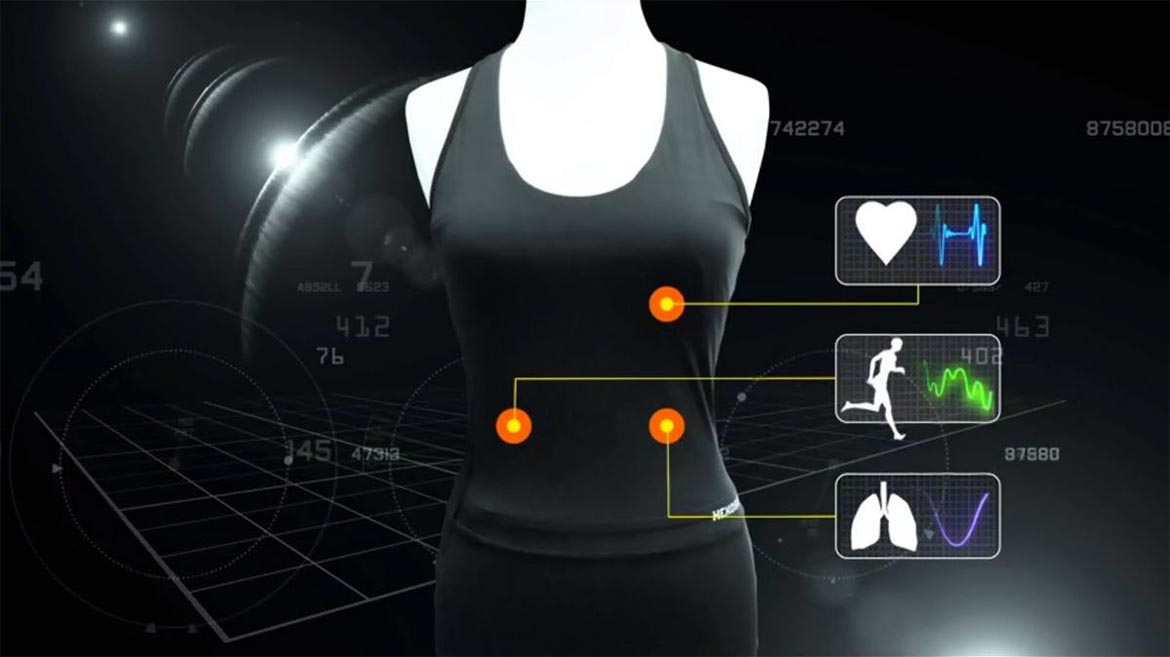 More than a decade ago, electronic fabrics made a sensational debut in design agencies and prestigious fashion schools. Electronic circuits and electrical wires were integrated into fabrics, promising a multitude of applications, from traceability to remote control. At the time, the circuits were rigid and electrical wires made fabrics difficult to stretch and a challenge to wash [1].

Electronic fabrics have evolved since then and are now intelligent, designed with many detection, communication, and interactive functions. Rigid circuits are now flexible and printable. Integrating printed electronic components with fibrous substrates has made it possible to obtain lighter and higher-performance textiles. But can smart fabrics be made to stretch, be washable and breathable?

A multidisciplinary team of researchers has created a method to print electronic circuits on fabric using a conventional ink jet printer. The resulting fabric takes very little energy to produce and is washable, flexible and it breathes. It can be used in several areas: military, health, fashion, Internet of things, etc.

The researchers produced a graphene-based ink and two-dimensional materials to print complete integrated circuits. The team worked from the results of previous research conducted at the Department of Engineering at the University of Cambridge. Their study, entitled “Inkjet-Printed Graphene Electronics”, published in March 2012 in American Chemical Society, presented an ink-injection technique for the production of transparent and flexible graphene-based electronic components.

The new (multidisciplinary) team includes researchers from the Cambridge Graphene Center, the Department of Materials Science and Metallurgy at the University of Cambridge, the Department of Physics at Politecnico di Milano, and the School of Textiles and Clothing at Jiangnan University in China. The team members successfully created an electronic circuit printing technique. Their study, entitled “Fully inkjet-printed two-dimensional material field-effect heterojunctions for wearable and textile electronics”, was published in Nature Communication on October 31, 2017.

The researchers designed a graphene and boron nitride-based low-boiling point ink, which they were able to print directly on a polyester fabric. They found that modifying the roughness of the fabric increased the performance of the printed components. The versatility of this process allowed them to design simple transistors as well as entire integrated electronic circuits.

Researcher Felice Torrisi of the Cambridge Graphene Center and lead author of this study noted that they used environmentally friendly ink, whereas the inks commonly used in printed electronics use toxic solvents. Roman Sordan, a researcher at the Politecnico di Milano and co-author of the article, noted that even though the study has produced simple circuits, the technique can be developed to print more complex and more efficient devices.

The Cambridge Graphene Center and Politecnico di Milano teams are also involved in a pan-European project called Graphene Flagship, funded by the European Commission and dedicated to the introduction of graphene technologies into commercial applications.

The research was funded by grants from Graphene Flagship, the European Research Council Synergy Grant, the Engineering and Physical Sciences Research Council, the Newton Trust, the International Research Fund of the National Natural Science Foundation of China, and the Chinese Ministry of Science and Technology. The technology is marketed by Cambridge Enterprise, which commercializes technologies created by the University.