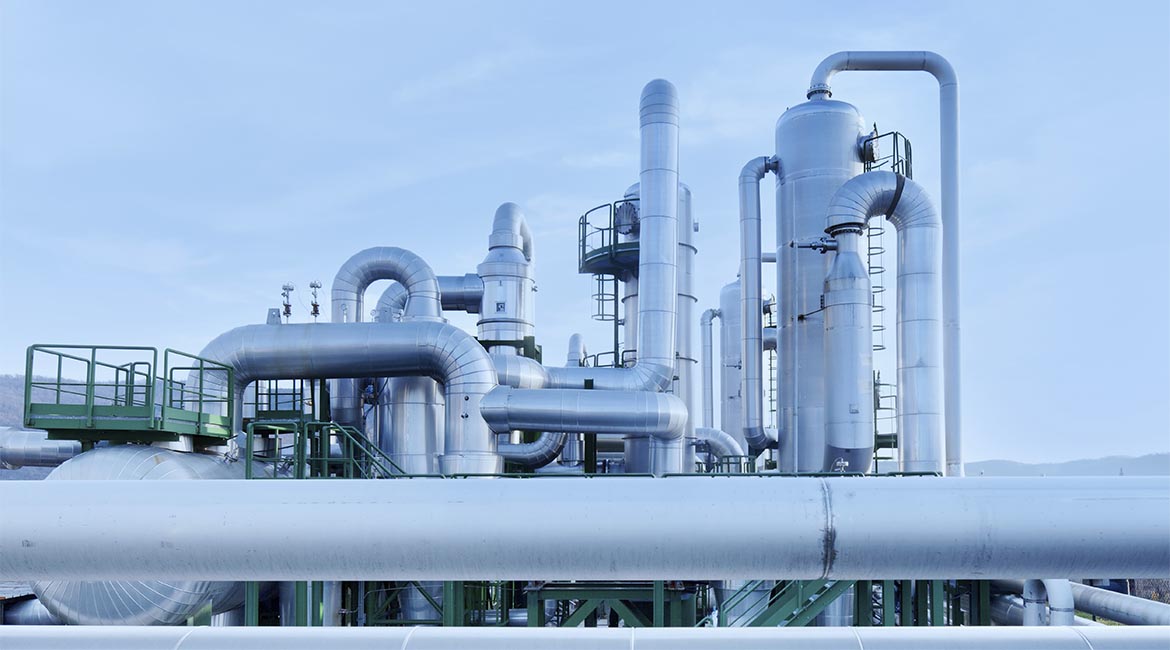 Deep geothermic consists of capturing the heat contained in the Earths’ crust in order to produce heat when the temperature is less than 90°C, or electricity if the temperature is between 90°C and 150°C. Transport of heat from the ground is performed using water circulation through a circuit. Production of electricity requires at least two deep drillholes; one for extraction of the geothermal fluid and the other for reinjection of the cooled water into the ground. Various technologies can be used to produce electricity.

The production of electricity using deep geothermic can be based on the use of the heat in the hot water naturally present in the ground: this is called “hydrothermal geothermic” and the energy resources are called “conventional”. Heat may also be extracted from deep rocks which are hydraulically-fractured by the high-pressure injection of water: this is known as petrothermal geothermic where the energy resources are called unconventional and the geothermal system is called an enhanced geothermal system (see Figure 1).

The production of electricity from geothermal sources was developed about one hundred years ago. The first attempt to produce it from steam took place in Lardarello, Italy in 1904. Further global development concentrated on volcanic regions which offered the greatest possibility of reaching the hot resources (>200°C) at relatively shallow depths and to produce electricity directly from dry or wet steam (Guzović, Majcen and Cvetković, 2012). Currently, most of the geothermally-produced electricity is concentrated in countries that benefit from geological environments which favor the use of such systems. 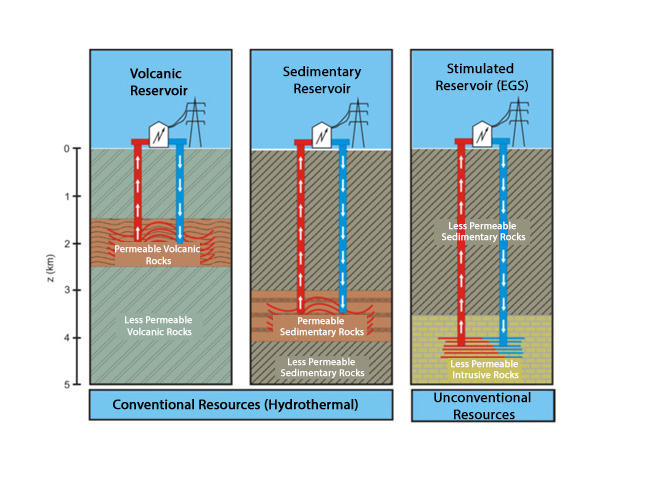 The enhanced geothermal system (EGS) is a new type of technology which does not require natural hydrothermal sources and is used to produce electricity from water circulating in high-temperature rocks at great depths. The principle is very simple. It consists of creating hydrothermal sources in hot, dry rocks (HDR) by hydraulic stimulation. The process begins by an injection of cold water into the ground via an injection well. This injection of water increases the water pressure within the reservoir (granite) which fractures due to the high pressure; the water absorbs the heat of the high-temperature rock, and the underground becomes more permeable. The injected water runs through the cracks in the geothermal reservoir, capturing the heat until it reaches very high temperatures and pressures, then it carries the heat, via the production well, to the evaporator where the secondary fluid absorbs the heat from the geothermal fluid. 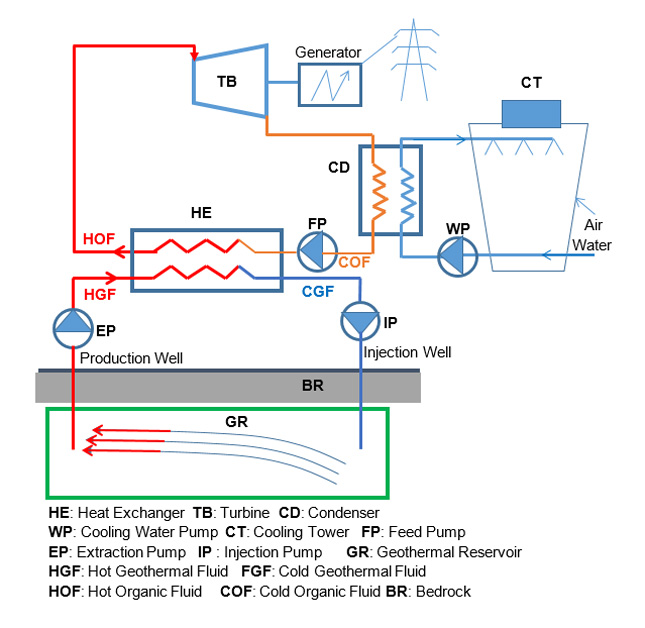 There are also other systems used to produce electricity when the source temperature is on the order of 200°C.

Steam leaving the geothermal well directly feeds a turbine to produce electricity (Guzović, Majcen and Cvetković, 2012). Used in the United States (California), Italy, Indonesia, Japan and New Zealand, this technology is based on the use of dry steam as the geothermal fluid (Gehringer and Loksha, 2012). Figure 3 illustrates the main components of a dry-steam geothermal power-plant.

Within a geothermal reservoir, the geothermal fluid can be a mix of liquid-steam at temperatures greater than 200°C and single-flash technology is used to produce electricity (Gehringer and Loksha, 2012). In this type of system, the pressure of some the mix is reduced in a separator in which some is evaporated and then sent to the turbine; the liquid portion is re-injected into the reservoir via an injection well. The main components of this type of power-plant are illustrated in Figure 4. 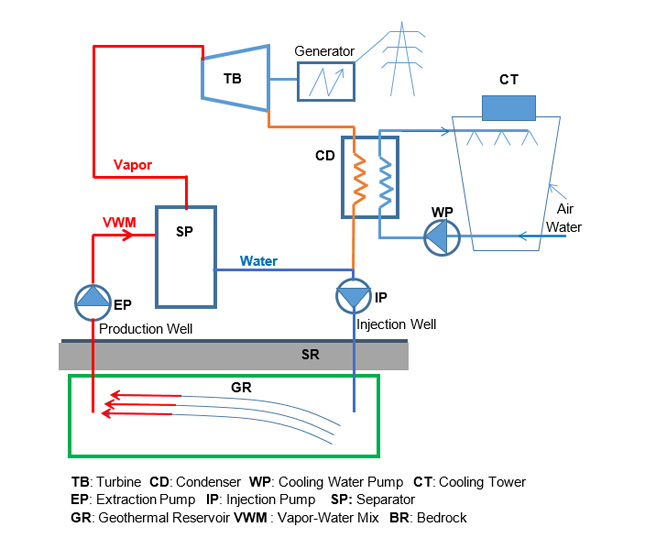 Most global geothermal resources are water-dominant, at temperatures less than 150°C and pressures below 15 bars (Barbier, 2002). Binary-cycle technology based on the Organic Rankine Cycle (ORC) is the most efficient solution to produce electricity from such resources (DiPippo, 2008). In binary power plants, changes of the properties of the geothermal resources could also shorten the life-span of the power-plant.

.
The first and most important step in the design of a power geothermal plant is an accurate evaluation of the geothermal potential, including a prediction of the reservoir’s response to various industrial configurations (Franco and Vaccaro, 2014). The performance of geothermal binary power plants based on the Organic Rankine Cycle depends not only on technical optimization, but also an appropriate selection of technology based on the reservoir’s specific characteristics. This is why it is critical to evaluate the geothermal reservoir’s characteristics by a computer simulation.

PhD Candidate at ÉTS, Department of Mechanical Engineering, Joël M. Zinsalo is a member of the Industrial Research Chair in Energy Technology and Energy Efficiency and the Center for Thermal Technology.