Does Your Home Have an Impact on the Ecological Footprint?

The world population has been constantly increasing since the early twentieth century. According to the United Nations, the urbanization rate was less than 30% in 1950; by 2007, it had reached 50%, and by 2030, this rate will be above 60%. Cities are the nerve centers of our society and a key factor in the reduction of inequalities; they are conducive to innovation and development.

This urban demographic structure, combined with unsustainable consumption patterns, puts increasingly heavy pressure on our ecosystems. Increased industrial and agricultural activity has an impact on land use, water consumption, air quality, and energy consumption. The transition to sustainable cities has become a major challenge of the century.

The key objective of this master’s thesis (15 credits) is to calculate the ecological footprint of Canadian households by type of dwelling and type of occupancy (tenant or owner). This calculation was applied to four types of housing: single detached (SD), double or semi-detached (SA), apartment (APP), and other (OTH – hotels, rooming or boarding houses, logging or construction camps). Only household consumption was taken into account; the ecological footprint that can be attributed to government, taxation, and public administration activities was not considered.

From these results, recommendations to reduce the environmental footprint will be made. By prioritizing and identifying the key consumption sectors, we are targeting the redevelopment of urban areas towards a transition to a more sustainable lifestyle. This new approach will help put into order of importance the ecological footprint of the different sectors and observe, within the city limits, the disparities in consumption among citizens.

The ecological footprint (EF) is an environmental indicator known around the world, and used by many institutions and countries (Figure 1). It serves to compare the demand for goods and services of a population to their need in natural resources (biocapacity). It assesses the areas of land and water needed to produce the resources that an individual, a population, or a given activity consumes, and to absorb the waste generated. The Ecological Footprint is usually measured in global hectares (gha). Using a common unit, i.e., global hectares, allows for different types of land to be compared using a common denominator. Equivalence factors are used to convert physical hectares of different types of land, such as cropland and pasture, into the common unit of global hectares (Global Footprint Network, 2016). 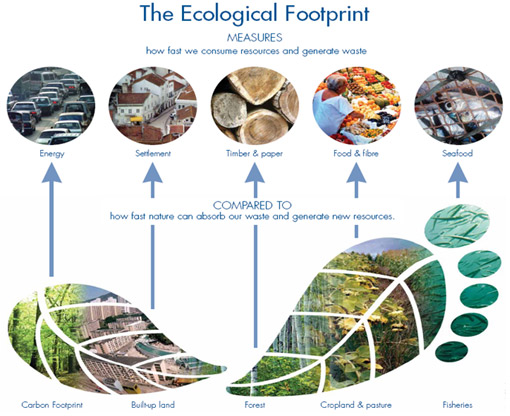 Canada is a vast country (the second largest in the world by area), home to approximately 35.7 million people. From 1961 to 2014, the Canadian EF increased by an excess of 15% in relation to a population increase of 88%; it is now ranking fourth in the world, on par with the 8.2 gha / cap of the United States (Global Footprint Network, 2016). Meanwhile, the biocapacity has decreased by 40%. However, Canada has many natural resources (forests, lakes, glaciers), indicating a very high biocapacity (14.9 gha / cap), and has a significant “ecological reserve”.

As we can see in Figure 3, the transportation and food sectors have the largest ecological footprint. In Canada, over 8 out of 10 households own at least one vehicle and the purchase / rental sector is responsible for the spectacular rise in the ecological footprint and, more specifically, the carbon footprint.

Moreover, the ecological footprint proportion of the housing sector (which includes maintenance and energy, i.e. heating and air conditioning) is totally different depending on the type of building. While the footprint for houses (all types) is large, it is quite small for apartments; this can be explained by the fact that heating and energy needs are higher for larger homes and that energy can be shared through apartments, which are mainly organised in blocs 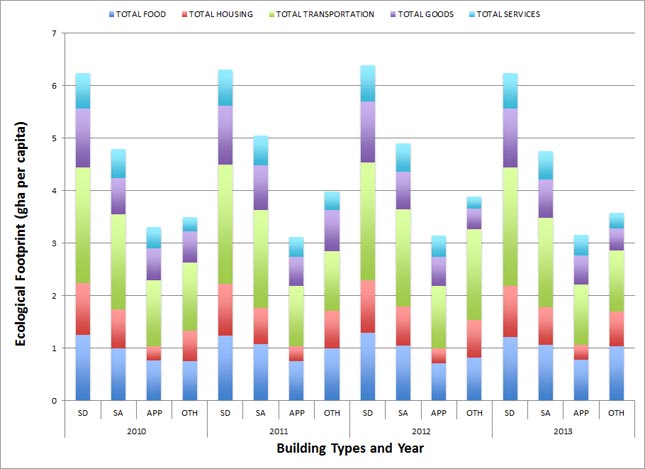 Figure 3 Footprint of Canadian Households by Type of Building, from 2010 to 2013

Figure 4 shows Canadian household spending by sector and type of building. These results come from the data collected by Statistics Canada, classified by spending sector in the calculation of the Ecological Footprint. Except for the type marked “Other”, Canadian household spending increased between 2010 and 2013. Compared to Figure 3, consumption is now distributed differently depending on the type of building; the order of the different types of buildings has changed. People living in detached houses are still the largest consumers (29,650 CAD per person on average over the 4 years) and carry the largest share of total spending (29%). However, people living in apartments come in second place (27,610 CAD – 26%), followed by those living in attached houses (26,620 CAD – 25%) and, finally, those from the “other” types of housing (21,130 CAD – 20%).

In contrast to the distribution of the ecological footprint, the largest spending share can be traced to the residential sector. Services represent the second-largest consumer sector. The size of this sector is mostly due to medical and insurance expenses of Canadian households. 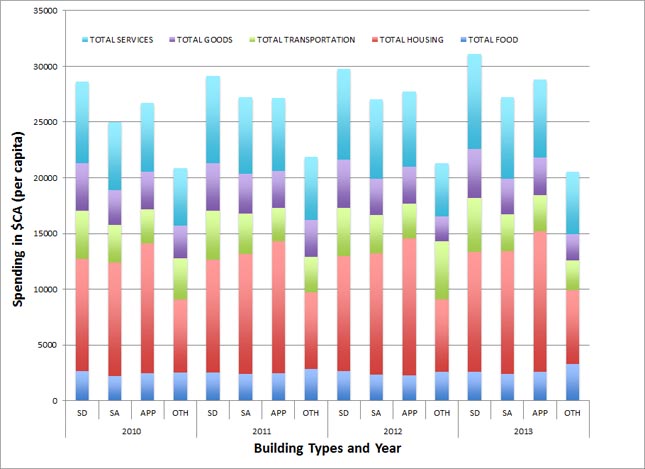 Figure 4 Expenditures of Canadian Households by Type of Building, from 2010 to 2013

The consumer data analysis shows that several factors interact in the composition of the ecological footprint. The importance of spending in one area is not necessarily linked to the footprint. Transportation is the number one priority to help reduce impacts on the environment. There are too many vehicles in circulation in Canada, and fuel combustion emits enormous amounts of CO2 and other greenhouse gases. The same can be said for the food sector, which is mainly based on the consumption of animal products (meat, eggs). This pace and type of consumption, along with intensive farming, are often responsible for the soil degradation and water pollution.

The present approach is part of a transition to sustainable development and to the creation of cities with a low impact on the ecosystems. It is shown that the ecological footprint is less significant for apartment dwellers. The impact of heating, on the environment, cannot be overlooked, especially in the Canadian context where the energy mix is based on the consumption of fossil fuels for several provinces. Apartment living, usually in cities and in densely populated areas, helps in saving heat, as these units are smaller and generally attached to others. Apartment dwellers are also less likely to own a car. Improving and increasing public transport services and constructing green buildings (LEED certified, for example) are therefore strongly recommended measures for Canadian cities. The next steps of this study will be to analyze the consumption and footprint by city, by type of residential building, and by type of occupancy.

This research was done under the direction of Claudiane Ouellet-Plamondon, and in collaboration with Statistics Canada and the Global Footprint California Institute. The Centre Interuniversitaire Québécois en Statistique Sociale (CIQSS) also supported this research.

This master thesis has led to the publication of the following article: “Ecological Footprint Analysis of the Canadian Households Consumption according to Four Types of Buildings and to Modes of Occupation”, which will be presented at the Sustainable Built Environment in Zurich, from June 13 to 17, 2016.

The authors wish to express their very sincere thanks to the FDDAÉÉTS and the CIQSS for their financial participation and support regarding this presentation.

Javier Beltran-Galindo is a Building Mechanical and Electrical Engineer at ÉTS.

Claudiane Ouellet-Plamondon is a professor in the Department of Construction Engineering at ÉTS.