When Drones and Robots Play Music… - By : Substance,

When Drones and Robots Play Music…

Drones can dazzle us with their video and picture shots and scare us with their military actions. Robots meanwhile make us very happy when they do the cooking and cleaning, but we riled when they replace employees. What about drones and robots playing music? In a way, they replace musicians but in another, they entertain us. But for that, they have to be  talented! If like us, you do not know what to think about drones and robots playing music, this article can help you to have an opinion on this point.

In one month, we will give you a feedback on Substance ÉTS readers opinion on those questions. In this article, we  propose drones and robots performances with four music styles: classical, movie themes, electronics and Rock and Roll.

Toyota’s company created a robot quartet with Harry and Dave playing trumpet, Chuck at the tuba, and Ritchie playing drums.

Songs played include the Theme of Lupin III, Moonlight Serenade, Stompin ‘at the Savoy, and A train to go.

This musical performance was presented at the 2012 TED conference. To learn how University of Pennsylvania engineers have created this drones interpretation, you can watch this video and this other video.

This video demonstrates how the company has achieved this musical interpretation with drones.

A German robotics rock band called Compressorhead performed many classical Rock and Roll song themes. The group consists of Fingers at guitar, Stickboy at drums and Bones at the base.

This band performed in this video a musical piece from the legendary Led Zeppelin band:

Designing a robot to play an instrument can allow the designer to be creative. For example, Stickboy the drummer has four arms:

Playing base is not always obvious: that is why the base player Bones has 78 “equivalent” fingers. 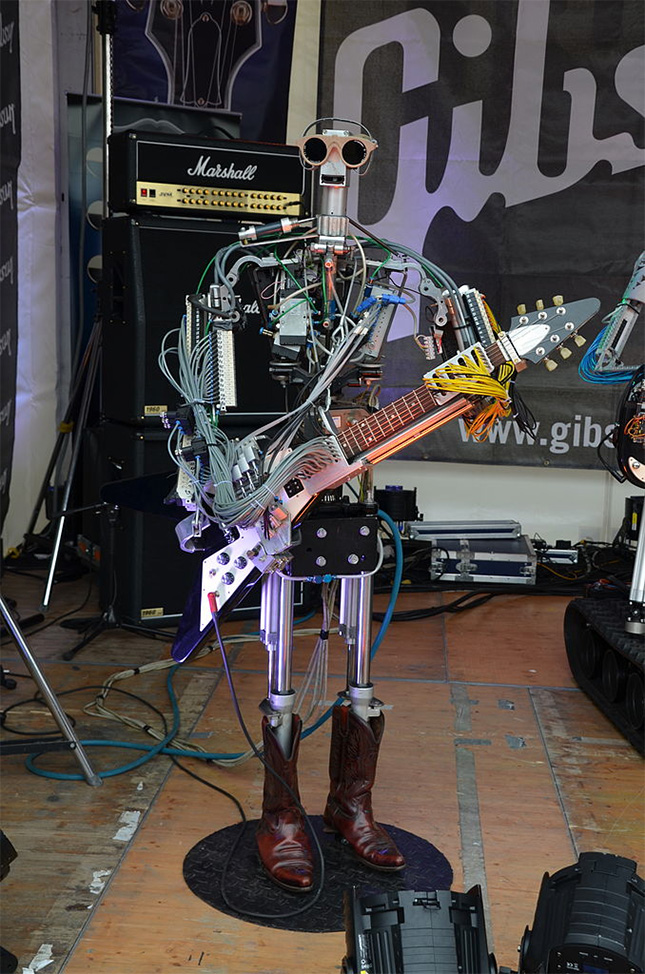 Robot designers Frank Barnes, Markus Kolb, and Stock Plum are currently seeking funding through the crowdfunding Kickstarter site to design a robot singer for the group.

Z machines, a robotic band from Japan playing rock, has a on their side a singer. Do they make it better than Compressorhead band?

So, according to you, are these drones and robots having equivalent or greater talent than human musicians? One day, will they replace humans?