Double Bubble: the Green Aircraft of the Future - By : Hanen Hattab,

Double Bubble: the Green Aircraft of the Future

Once upon a time there was the “Double Bubble”, a new student aircraft concept that conquered one of NASA’s largest prospective environmental projects, the Transformative Aeronautics Concepts Program. The aircraft, created in 2010 after two years of work in the Department of Aeronautics and Astronautics of the Massachusetts Institute of Technology (MIT), was adopted the same year by NASA, adding to the ideas that will give rise to greener aircraft by 2035.

The student team was led by Ed Greitzer, professor of MIT’s Aeronautics and Astronautics, with contributions from Aurora Flight Sciences Corporation and Pratt & Whitney. In 2016, NASA signed a US$2.9 million (£2.19 million) contract with Aurora for the construction of the double bubble concept prototype. In 2017, the company produced the first design dubbed the D series.

Aurora estimates that the first D series aircraft could be flying in 2025. The aircraft is characterized by an efficiency increase of 50% over current models and, if adopted, could bring a 25% decrease in global fuel consumption.

In order to meet the challenges of future air transport, the student team’s main objective was to create a less polluting subsonic aircraft. The Double Bubble had to consume 70% less fuel and reduce its nitrogen oxides (NOx) emissions by 35%. This plane had to be able to take off and land on shorter runways.

The team designed two models: the D series, which can carry 180 people, and the H series, equivalent to the Boeing 777 with a capacity of 350 passengers.

The Double Bubble is characterized by control surfaces and horizontal stabilizers mounted above the reactors located at the back of the fuselage. 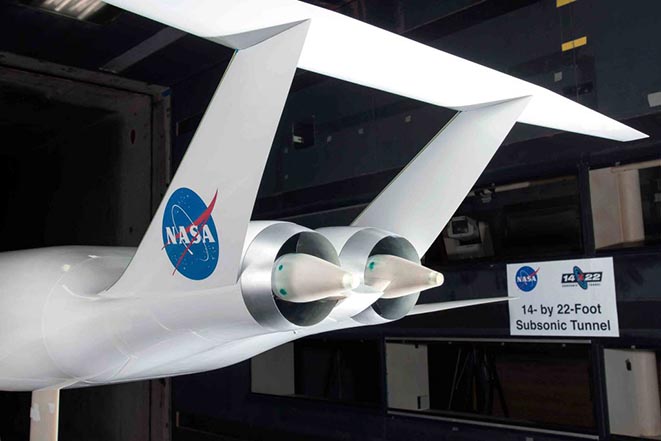 To draw the shape of the aircraft, the designers used a Boeing 737-800 model, taking into consideration the above-mentioned objectives. The name of the aircraft reflects its original design in the form of a double fuselage. Two hulls were fused together, resembling two soap bubbles that form a larger volume, which also makes it possible to increase the number of seat rows and to have a double-aisle cabin. The intersection of the two hulls creates a curved groove, at the top of the airfoil, which optimizes a design based on the boundary layer ingestion principle.

With this blended wing-fuselage configuration, the engine pylon can be removed by positioning the reactors in the rear. This design leads to increased propulsion efficiency by eliminating the aerodynamic resistance produced by the pylon. In the Double Bubble, the curved groove accelerates airflow and optimizes the surface aerodynamic efficiency, which contributes to the proper functioning of the boundary layer ingestion principle.

Morphological Characteristics of the Double Bubble

The fuselage diameter was enlarged and the nose was tapered and elevated to optimize the aircraft’s aerodynamic resistance. These transformations allowed to produce longer and more slender wings leading to lower resistance. The modified nose shape and tail size help improve aircraft stability.

Conversely, the Double Bubble has a lower cruising speed, from 0.8 Mach to 0.76 Mach, which represents an additional 18 minutes for a three-hour flight. However, this down time is minor compared to the overall energy consumption reduction achieved by this design. Furthermore, the cabin configuration helps save time during boarding and disembarking.

For this concept the boundary layer ingestion represents a major technological challenge to overcome. Indeed, when placed at the rear of the aircraft, the reactors receive non-uniform air flows, such as:

In addition to the stresses generated by turbulent flows, this irregularity alters the performance of the reactors.