Ricardo Izquierdo, professor in the Department of Electrical Engineering at the École de Technologie Supérieure (ÉTS) and member of the Communications and Microelectronic Integration Laboratory (LACIME), is working on shaping nanomaterials using various microfabrication techniques, such as printed electronics, on more efficient solar cells and the development of labs-on-a-chip. 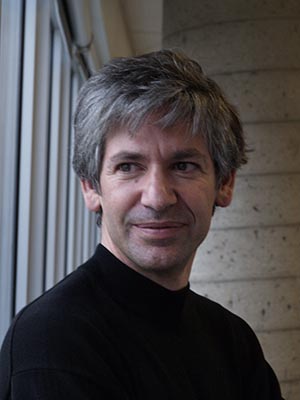 Professor Izquierdo is developing various manufacturing processes for micro and optoelectronic devices, for example, by ink jet or aerosol jet printing [1]. The process begins by putting materials in solution (polymers) or in suspension (quantum dots, carbon nanotubes) in a liquid that then becomes the ink material. Printing is then done on a rigid or flexible substrate, according to the geometry and sequence required in the design plan. With this technique the device is fabricated directly, as opposed to photolithography, which requires creating a photomask before manufacturing.

Presently, one of the largest markets for printed electronics is the production of electrode strips used to measure blood glucose levels. Ricardo Izquierdo wants to develop other biomedical sensors using new materials like graphene.

Another application of special interest to Professor Izquierdo is the manufacturing of solar cells that can capture a wider range of solar spectrum to produce more electricity [2], [3] and [4]. Current solar cells only capture wavelengths in the visible part of the spectrum. By combining polymers with nanomaterials like quantum dots, the resulting solar cell can also absorb infrared light, producing electricity with higher efficiency.

Lab-on-a-Chip and Other Sensors 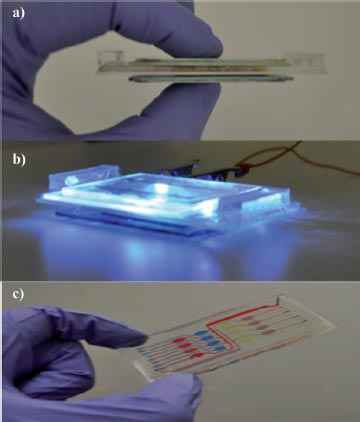 Ricardo Izquierdo has also teamed up with an algae specialist to build a lab-on-a-chip that can assess the health of waterways [5], [6] and [7]. In this mini-device microalgae are placed in a microfluidic analysis chambers and exposed to the water being analyzed. Organic light-emitting diodes (OLED) provide light to the algae to promote photosynthesis. The photosynthesis activity level is evaluated by measuring the algae-emitted fluorescence using photodetectors, which transform this measurement into electrical signals. At the same time, electrochemical sensors made of silver nanowires measure oxygen concentrations in the water, another factor affected by photosynthesis activity levels. Combining fluorescence with oxygen measurements makes it possible to evaluate the physiological condition of the algae and, thereby, pollution levels to which they are exposed.

Professor Izquierdo is also developing sensors to measure chemical pollution in effluents from the pharmaceutical and mining industries before they are released into the environment. The challenge presented by these sensors is their specificity, as some chemical components can interfere with the measurements. Consequently, it is sometimes necessary to add a selective membrane to filter a compound before taking the measurement.