Cubesat: A Hundred Nano-Satellites Tested Since 1999 - By : Substance,

Cubesat: A Hundred Nano-Satellites Tested Since 1999

The concept of nano-satellite Cubesat was created in 1999 by two American universities: California Polytechnic University (CalPoly) and Stanford University. It is a cube of 10cm side (around 4 inches), with a volume of 1 liter (0,035 ft3)  and a weight not exceeding 1.33 kg (2,93 lb). It is possible for anyone to make a Cubesat because it uses common electronic components available on the Internet as well as information to build it. It could costs less than $60,000 to build and launch it. It was indeed designed to carry out scientific experiments at low cost.

This type of projects interests many universities around the world for training and research. 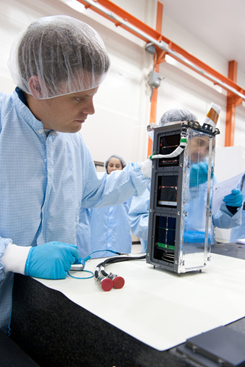 Since 1999, more than a hundred Cubesats were sent into space. They were usually placed in low orbit from a system called “Poly-PicoSatellite Orbital Deployer” or P-POD designed by CalPoly.

A P-POD is built to hold 3 Cubesats and fit on most secondary rockets as a secondary payload.

With no propulsion energy sources, they remain in orbit a few weeks before being disintegrated when re-entering the Earth’s atmosphere.