Toward the Design of a Prosthetic Ligament for Cattle - By : Lucien Diotalevi, Yvan Petit, Vladimir Brailovski, Éric Wagnac,

Enrolled at ÉTS as part of the PhD exchange partnership with École Nationale Supérieure des Arts et Métiers in France, his country of origin, Lucien Diotalevi won the award of excellence for best master’s thesis among 380 graduates at the graduation ceremony held November 18, 2018. 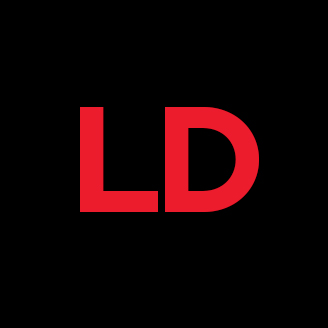 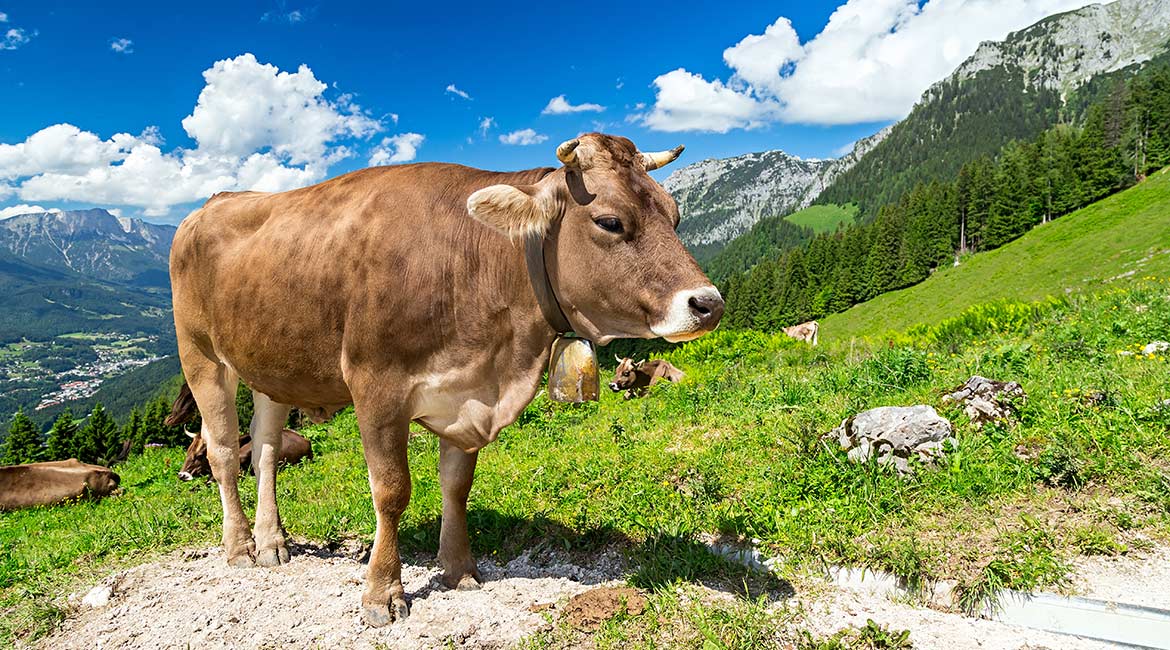 Image purchased on Istock and protected by copyright.

Cranial cruciate ligament injury is infrequent but disabling in adult cattle. It requires a surgical intervention using ligament substitutes which, unfortunately, are still inadequate because of their lack of workability and a lack of documentation on the actual mechanical properties of the bovine cranial cruciate ligament. Therefore, this research study aims to assess the quasi-static tensile mechanical properties of the healthy ligament in order to develop design specifications for a new substitute. Then, a NiTiNOL filament braid prototype of a prosthetic ligament was designed, manufactured, and tested. Results support the viability of this project and also pave the way for new surgical applications in large and small animals.

Rupture of the Anterior Cruciate Ligament 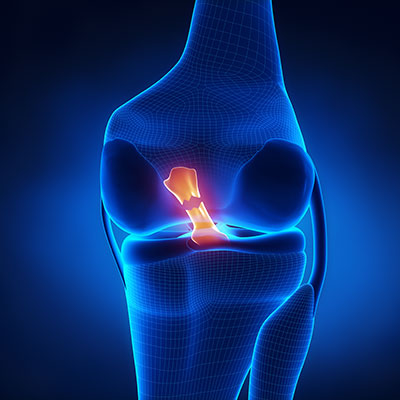 The first signs of a torn CrCL appear in an animal as a lameness, followed by an inability to move, then to get up. CrCL rupture leads to rapid degradation of the animal’s general health and compromises its ability to feed itself [3]. With such suffering, the animal can no longer be used for milk production [4, 5] or for reproduction, causing economic loss for producers [6].

Given farmers’ natural reluctance to slaughter one of their animals, coupled with the fact that this would be an economically unprofitable situation, veterinary surgeons are called upon to stabilize the stifle joint. The surgical procedure, called the “Hamilton Technique”, consists of piercing the femoral and tibial extremities of the animal to pass a ligament substitute through [7]. Currently preferred are synthetic substitutes such as a nylon monofilament or, in other words, a heavy gauge fishing line.

The objective of this research project carried out in collaboration with the Faculté de médecine vétérinaire de Montréal, was to assess the quasi-static tensile properties of a healthy CrCL, then to establish the preliminary design of a substitute replicating these properties.

The  quasi-static tensile properties assessment of a healthy CrCL was performed on 14 stifles from 7 adult female cows. These animals had all been previously euthanized at the Faculté de médecine vétérinaire for serious health disorders that had no impact on the structure and mechanical properties of their ligaments. Their CrCLs were first mechanically preconditioned and then subjected to a controlled tension until failure. Digital image correlation technology was used to adequately characterize the ligament, its local behavior, and its failure mechanisms. Analysis of the results made it possible to establish a master curve for the mechanical behavior of a healthy CrCL, and an experimental corridor, creating a guide for the design of a new ligament substitute (Figure 2). Since the mechanical properties of a ligament did not appear to be influenced by bovine age, weight, or the hindlimb from which the ligament was extracted, one substitute model can be used in all the circumstances of the present study [10, 11]. 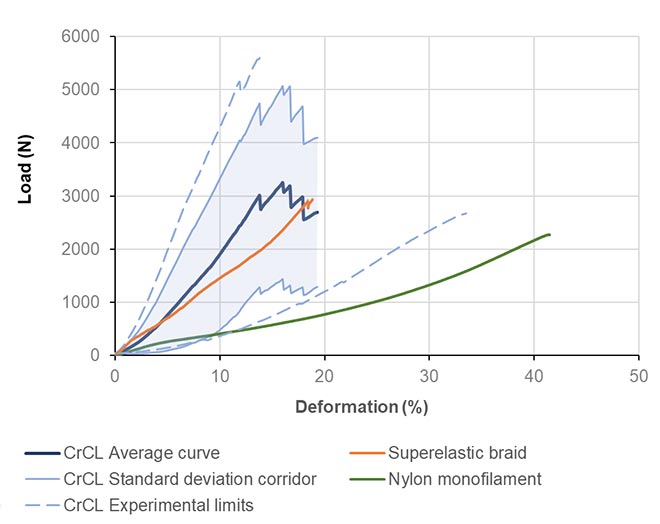 Mathematical modeling showed that a superelastic tubular braid of NiTiNOL (equiatomic titanium and nickel alloy) 0.39 mm-diameter filaments, with an inner diameter of 4 mm and braided at an angle of 43° makes it possible to replicate the mechanical properties of a healthy CrCL (Figure 3). A prototype was manufactured and tested in quasi-static tension. The load-deformation diagram of this test closely follows the shape of the CrCL master curve, remaining within its experimental corridor, thus demonstrating the feasibility of such a project (Figure 2). In addition, thanks to the superelastic braid low bending stiffness, when compared to a nylon monofilament, a potential revision of the surgical technique is possible [11].

The designed and manufactured substitute paves the way to new viable solutions for the treatment of CrCL rupture in adult cattle and could soon be implanted in animals. Ultimately, this substitute could also be adapted to meet similar needs in other animals, like cats and dogs, and could become a common tool for these applications in the veterinary medical field. Since synthetic substitutes for human cruciate ligaments are still showing some shortcomings [12], this work can also offer leads for further exploration. Finally, this project is fuelling an interest in superelastic braids for medical applications presented by École de technologie supérieure in previous work on suture threads [13, 14] and, given the versatility shown in these various research studies, other applications could emerge.

For more information on this research, please refer to the following article and thesis: