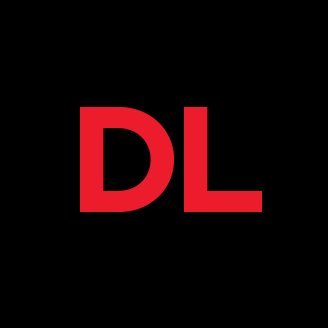 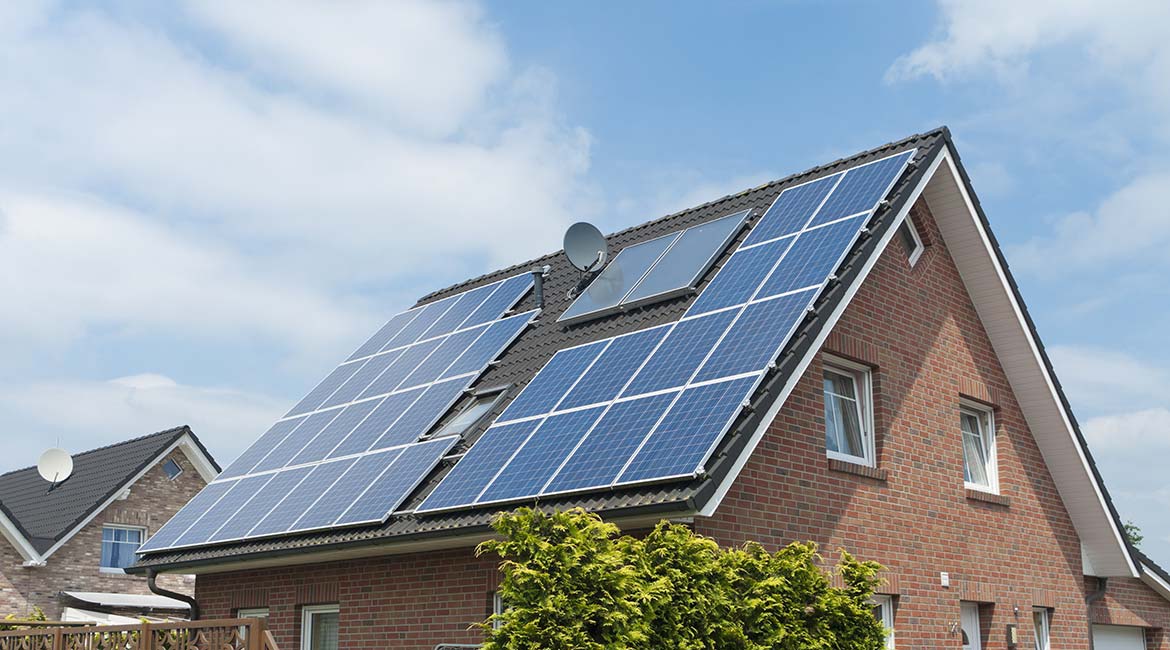 The header image was purchased on Isock.com and is protected by copyright.

The significant drop in prices of solar photovoltaic (PV) collectors makes it possible to consider new profitable applications depending on geographical context. Can their use for domestic water heating be cost effective when compared to solar thermal heating? Modelling and numerical simulation of the different systems have made it possible to compare their economic performance over 20 to 40 years. The PV water heater is very advantageous for hot regions such as Cuzco and Marseille, and advantageous for northern communities such as Kuujjuaq and Kuujjuarapik. For Montreal and Saguenay, the system has a net present value over 40 years of close to zero, an economic equilibrium because of the very low cost of hydroelectricity used in Quebec. Key words: Water heater, solar, thermal, photovoltaic, economic return

Solar thermal (ST) heating systems are well-documented, mature technologies (Figure 1). Their efficiency is high for regions of the world with medium to strong insolation. However, their lifespan remains relatively short and their maintenance and purchase costs remain high. Hydro-Quebec’s (HQ) Energy Technology Laboratory concludes that in the context of Quebec’s large hydroelectric network, they are not profitable [1]: the measured energy saving is 33% to 38%, as opposed to the advertised 50% to 60% saving. In addition, operating limitations inherent to STs in the colder climate are encountered. 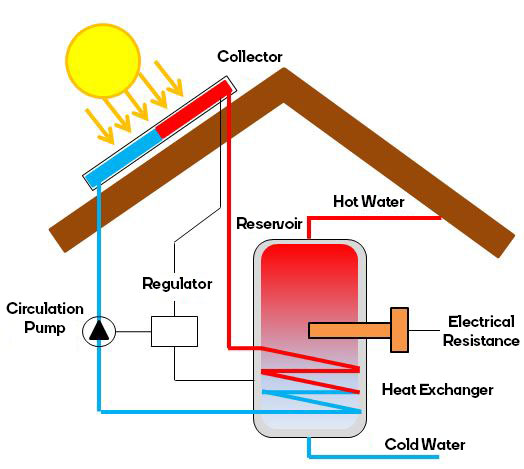 Meanwhile, PV collectors can maintain almost constant conversion efficiency for about 40 years, perform better in the cold and require little maintenance. The exponential growth of global demand has resulted in a price drop for PV collectors of about 80% since 2010. However, the electronic conversion required to adapt the fluctuating electricity produced to the electrical distribution network increases the cost of this process. One of the avenues explored to make photovoltaic heating (PVS) more economical is to eliminate electronic conversion equipment and to use the electricity produced for heating water directly. A preliminary study by the TERRE Chair [2], conducted near Saguenay, shows that the cost of energy produced by self-installation is equivalent to that of the HQ network (Figure 2). 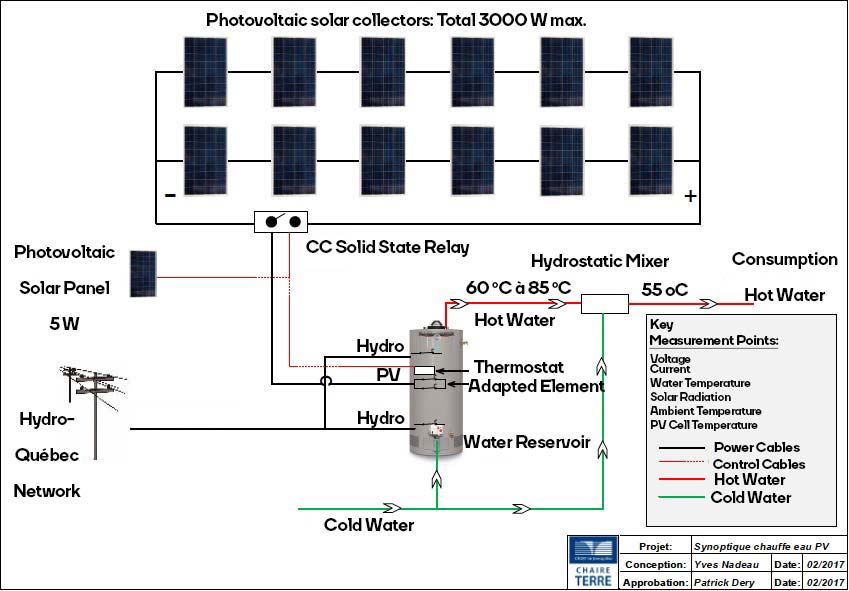 In this context, this work aims to compare the economic profitability of the ST with that of the PVS without regulation equipment and maximum power management. The formal objectives are to estimate the profitability of passive ST, active ST and PVS for six selected locations based on their sunlight characteristics, their current energy supply, and the cost of their energy. Parameters that must be determined include the annual energy produced, the initial investment, the cost of energy and the return on investment period.

Principle of the PVS water heater

The PVS works in conjunction with electricity on a standard domestic tank with tree heating elements. The central element is directly connected to the PV collectors, while the other two are connected to the network, to maintain a minimum temperature of 55°C and to avoid legionellosis. The central element can superheat the water up to 85°C, which makes it possible to store a maximum of energy and to restore it later. This hot water is mixed with cold water before being distributed. PVSs can only heat water to between 60 and 85°C (Figure 2).

Net Present Value (NPV) represents the 20-year gains or losses for each solar heating system, based on the reference energy used (Figure 3). The results show that the PVS is the most profitable, regardless of the location. The biggest gaps are visible in cold regions, because STs lose their technological efficiency, which is the opposite for PV collectors. The warm regions see the gap being reduced between the PVS and the ST. In this case, the ST is much less expensive, because the technique is more widespread, the system is much less complex and the coolant does not freeze in winter, reducing the costs of installation. 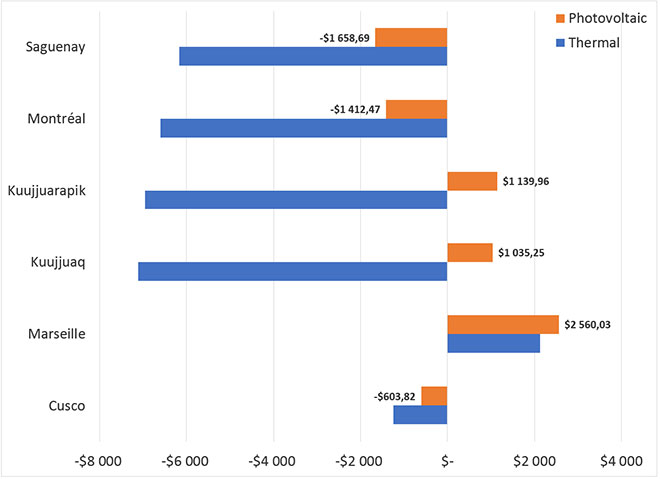 Given that PV Systems are usable for up to 40 years, with storage tank replacements every 10 years, the calculation of 40-year NPVs provides a greater insight into the performance of PV Systems. For PV Systems, they would be 2 to 3 times greater than over 20 years. For Montreal and Saguenay, they would be almost nil (respectively $5 and -$800), an economic equilibrium despite the very low cost of hydroelectricity in Quebec.

Modeling domestic hot water (DHW) heating systems demonstrates that PVSs are more profitable than STs. In cold regions, the difference in profitability is more pronounced, with average returns 8 times higher for PV Systems. In hot regions, STs are less expensive than in cold regions and are subject to less energy loss due to extreme temperatures and less intensive maintenance. The differences between PVSs and STs are then less significant.

With global demand increasing for PV collectors, cost reductions are expected to continue, and thus gradually increase the profitability of PV Systems over time. Bloomberg’s last 2018 report indicates that since 1976 prices have fallen from over $80 USD/W to less than $0.30 USD/W. The authors of the report expect that “prices of PV collectors will keep pace with the 28.5% decline they have experienced over the last 40 years” [3]. This will result in increased competitiveness over the years of the PVS compared to the ST and reference energies, even in Quebec where electricity rates increase each year.

Diane Le Roux is a candidate for a master’s at ÉTS, as well as a mechanical engineering diploma at INSA Toulouse. Her research focuses on solar energy.