A Cognitive Receiver for Indoor Positioning

Maherizo Andrianarison Author profile
Maherizo Andrianarison is a PhD candidate in electrical engineering at the ÉTS. He holds a master’s degree in networks and telecommunications from the ENSEEIHT. He is working on GNSS signal processing in constrained environments.
Program : Electrical Engineering
Research laboratories : LASSENA – Laboratory of Space Technologies, Embedded Systems, Navigation and Avionic

Mohamed Sahmoudi Author profile
Mohamed Sahmoudi is a professor in the Department of Electronics, Optronics and Signal Processing (DEOS) at the Institute for Higher Education in Aerospace Engineering (ISAE), Toulouse, France. 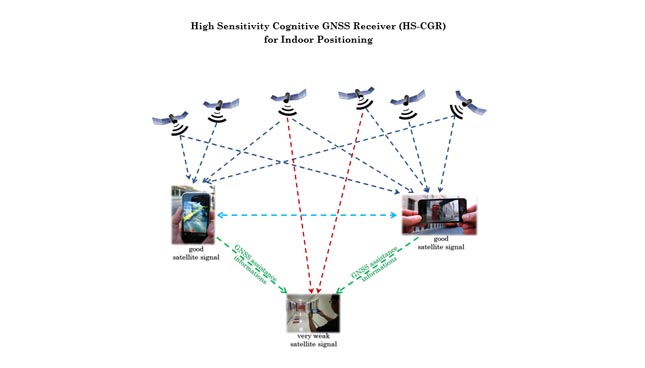 The first part of this article entitled An Indoor Positioning System using Cognitive Radio has presented the indoor Positioning system, its objectives and methodology. In this second part, we will see the architecture of the High Sensitivity Cognitive GNSS Receiver – HS-CGR, tests and the conclusion.

Designing a HS-CGR can be approached as using CR technology in GNSS receiver design. The purpose of adding cognitive capacity is to develop a system that is self-adaptive and autonomous. In order to do this, several different aspects must be taken into account:

Figure 1 shows a diagram of the HS-CGR. The portion in grey (the lower section) illustrates a generic HS-GNSS receiver. 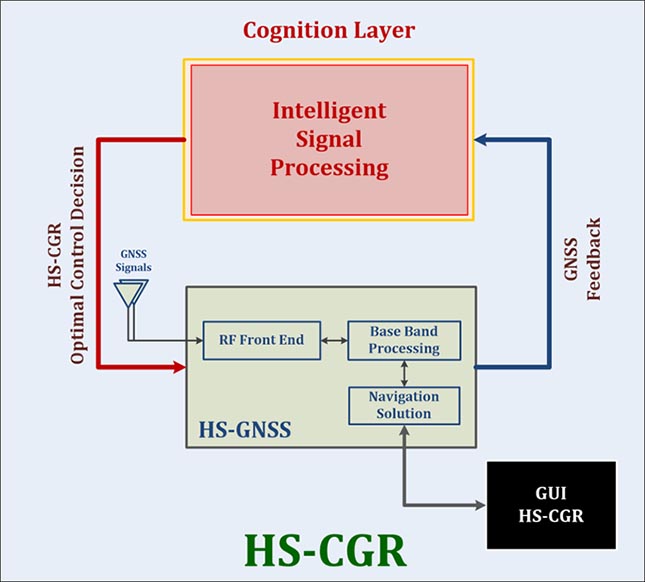 For situations in which receiving satellite signals is challenging and signals are very weak, a recent approach called “collective detection” or “collaborative detection” has been proposed. This approach makes it possible to process signals from all satellites in view at the same time. The proper combination of correlation values from several satellites can reduce the level of C/No required from satellite signals that cannot be acquired separately, and collectively they can contribute to a positioning solution [2] (Figure 4). 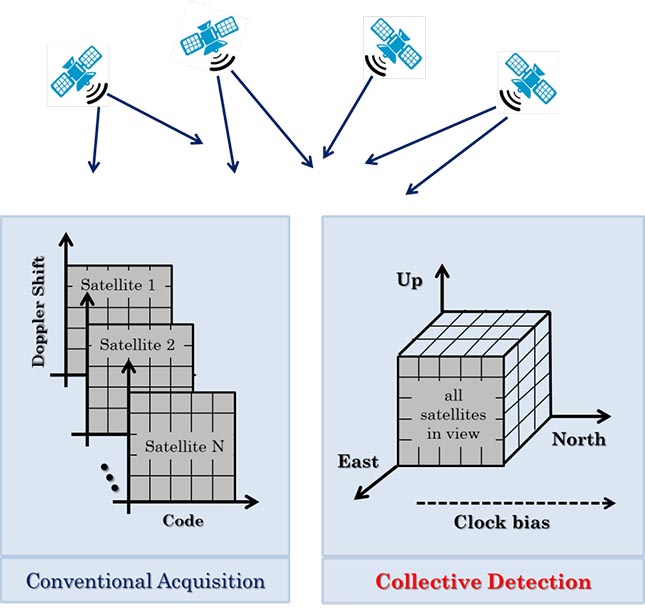 With this approach, the search uses position/clock bias, unlike the conventional approach that uses code/Doppler estimation. The idea is to be able to calculate the position directly after the acquisition process, without having to rely on the tracking process (Figure 5). 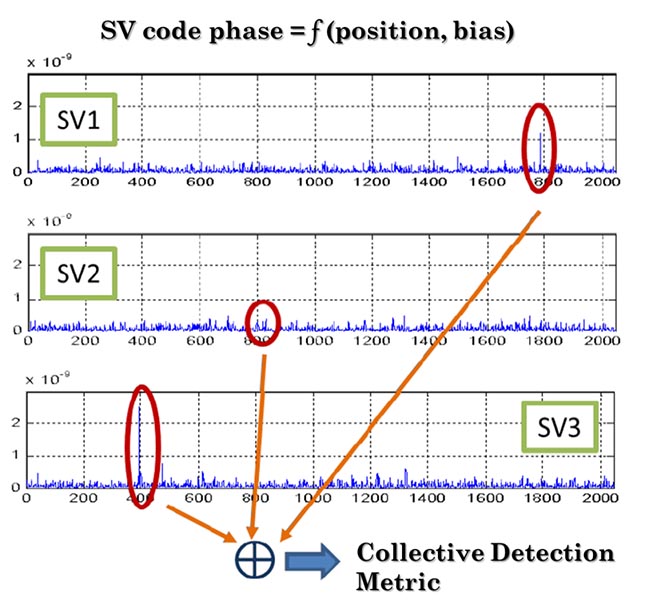 Figure 6 illustrates where the GPS L1 C/A signals were recorded in downtown Montreal (near ÉTS) for the test scenarios. 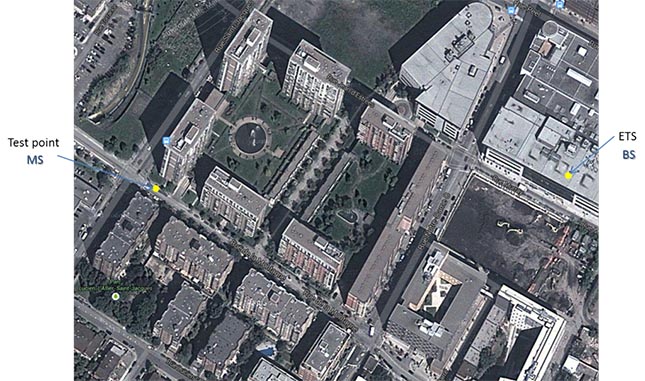 Here is an example test scenario conducted at ÉTS. The reference receiver (Rx GNSS from LASSENA) sends data (ephemeris, pseudo-range, position, etc.) to the mobile receiver (USRP B210) to help the acquisition process in order to calculate its position. 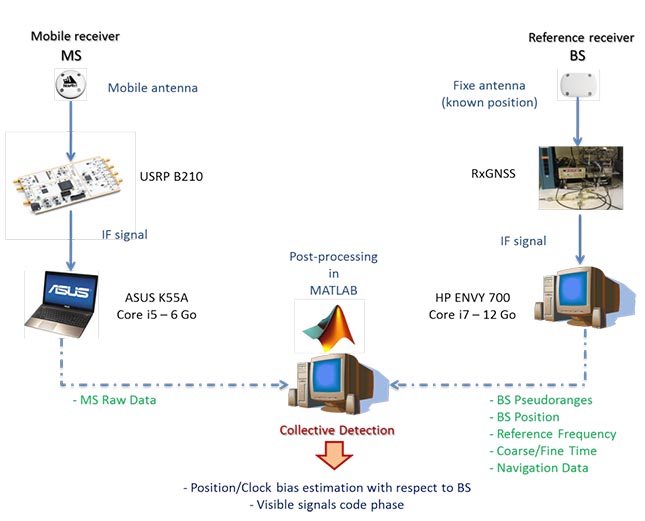 Long integration is always best for increasing receiver sensitivity. Applying this technique is advisable, as it will help obtain a good correlation peak for each satellite before calculating the collective detection metrics.

Shown here are curves illustrating how, in post-processing, the correlation peak increased when the integration period was extended in the collective detection approach, even with weak signals received at 35 dB-Hz.

Figure 8 Increase of the correlation peak when the integration period is extended.

We confirmed that extending the integration period results in a good correlation peak for collective detection metrics computation.

By carrying out this research project, we were able to make good use of the various GNSS satellites to create a multi-frequency/multi-constellation receiver. Using cognitive radio technology in GNSS receivers is sure to lead to new lines of research in this field. Similarly, using the new collective-detection approach to deal with the receiver sensitivity problems may pave the way to new applications, such as using other receivers to help a receiver that is experiencing problems while exchanging information on the ephemeris and their positions. All GNSS will be used by the new multi-constellation/multi-frequency cognitive receiver to ensure that sensitivity is good enough for new indoor applications, not currently possible with the GPS system on its own. New applications similar to Waze will appear. Currently, the broader geolocation market is focussed on intelligent transportation systems and location-based services, which are very promising. Resolving navigation problems associated with GNSS-denied environments is decidedly advantageous for both users and operators of satellite-guided navigation systems—particularly with the development of important mobile telephone technologies. This project helps reduce costs associated with the installation of additional positioning equipment in challenging environments.

Our work is unique in that we used collective detection to acquire multi-constellation and multi-frequency signals while using cognitive radio technology to make the receiver reconfigurable and more intelligent.

This thesis project is being conducted as part of a double-degree program at ÉTS and the Institut Supérieur de l’Aéronautique et de l’Espace (ISAE) in Toulouse, France.

An article on the collective detection portion entitled “A New Method of Collective Acquisition of Multiple GNSS Satellite Signals in Challenging Environments” was accepted and will be presented at the Navitec Conference, held December 3 to 5, 2014 in Noordwijk, Netherlands. The full text will be available after the conference.

Maherizo Andrianarison is a PhD candidate in electrical engineering at the ÉTS. He holds a master’s degree in networks and telecommunications from the ENSEEIHT. He is working on GNSS signal processing in constrained environments.

Mohamed Sahmoudi is a professor in the Department of Electronics, Optronics and Signal Processing (DEOS) at the Institute for Higher Education in Aerospace Engineering (ISAE), Toulouse, France.