Michel Fréchette Author profile
Michel F. Fréchette is an expert on nanodielectrics. He spent 35 years as a senior scientist at the Institut de recherche d’Hydro-Québec (IREQ).

In recent decades, polymeric composites have received significant interest due to several enhanced properties, such as excellent mechanical, thermal, electrical and light-weight properties. In this regard, carbon-based materials like polymeric matrix reinforced by carbon black and graphene have answered particular requirements for several electrical applications. For example, these composites are commonly used as semi-conductive materials in high voltage underground cables. The 1998 ice storm in Quebec caused catastrophic effects that led to billions of dollars in damages, which could have been prevented by using extruded-underground transmission cables instead of overhead lines. In fact, extruded high-voltage cables feature long durability, lower environmental impact and lower maintenance cost. However, improved design and development of enhanced insulating and semi-conductive composites for use in the different layers of high voltage cables still needs to be done. Therefore, considering the above-mentioned requirements, we studied the electrical, mechanical, and thermal properties of LDPE/CB (low density polyethylene/carbon black) composites and our findings led to the design of an appropriate polymer composite with suitable electrical and thermal conductivity as well as increase mechanical properties for electrical applications. Keywords: Electrical conductivity, composites, carbon black.

Polymers, materials formed with hundreds to thousands molecules, are considered good candidates to be combined, tailored or blended with fillers due to their suitable processability, recyclability, compatibility and biodegradability. Conductive particles such as carbon black, carbon nanotubes, or graphene are conductive fillers due to their own unique structure, which allows the transport of charge carriers. Combining these conductive fillers with insulating polymers can lead to sufficient electrical conductivity for the composites to be used as a semi-conductive component.

Using polymeric composite materials presents several issues that need to be addressed. The main issues are described below.

Electrical breakdown is defined as a rapid phenomenon that occurs in insulating polymeric materials or non-conductive polymeric composites, where a current surge suddenly occurs through the material leading to its local destruction or carbonisation. Thus, when a electrical breakdown occurs, it causes an irreversible destructive incidents in materials [1].

Basically, two types of degradation, chemical and physical, can occur in polymeric composites. This degradation leads to a deterioration of the materials’ initial properties. Thermal aging is one of the most common issues in nanocomposites applicable to high-voltage cables. In fact, the heat generated during the electrical power transmission in cables causes warming in the cable structure which in turn can degrade the composite structure [2].

Resistance to Erosion Due to Corona Discharge

A corona discharge will occur when the strength of the electric field around a conductor is high enough to form a local gaseous plasma, but not high enough to cause a complete electrical breakdown or arcing from one electrode to the other. This intense plasma and the reactive gases created in the plasma usually erode the material’s surface and increase the likelihood of electrical failure [3].

Therefore, these issues require research to solve the existing problems. In our study, by tailoring the carbon black content and distribution in low-density polyethylene (LDPE), we investigated the electrical and thermal properties of the resulting composites.

In this study, low-density polyethylene, being one of the most available polymers, was selected due to its suitable mechanical properties (flexibility at a wide range of practical temperatures) and processability. Carbon black with adequate electrical conductivity was chosen. An industrial-friendly fabrication method like extrusion blending was used to prepare the desired composites. Our findings are presented briefly here: 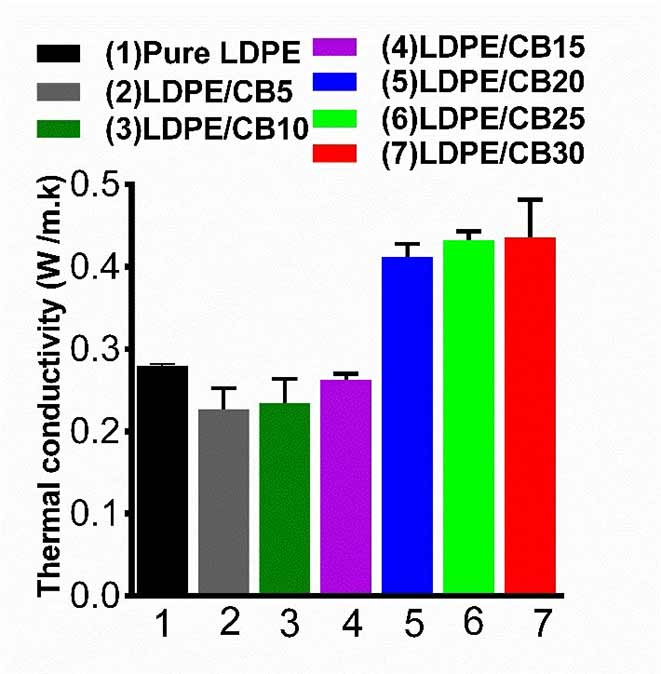 In a nutshell, these characteristics make the prepared and characterized composites good candidates with suitable electrical, thermal and mechanical properties for some applications in the electricity industry. We also investigated several more material properties, such as filler dispersion and distribution by scanning electron microscopy (SEM) (see Figure 3), composite morphology by atomic force microscopy (AFM), electrical hysteresis in the composite, and filler exfoliation by XRD analysis, as explained in our research paper [4]. 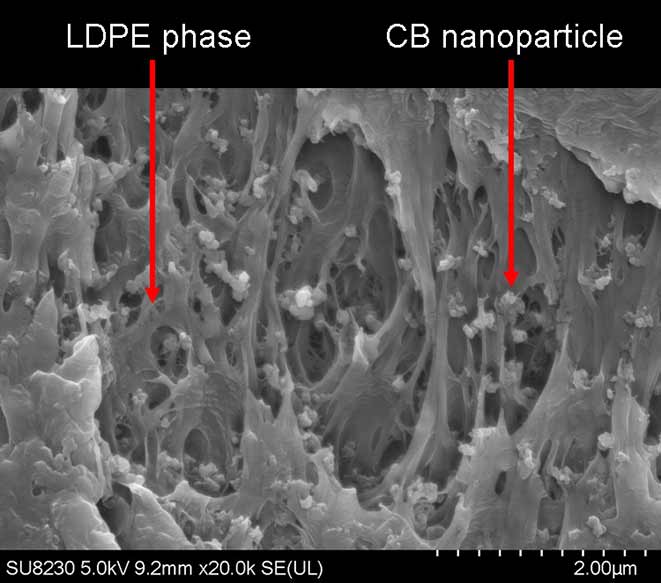 Sohrab Azizi is a Ph.D. student in the Construction Engineering Department at ÉTS. He studied polymer engineering and technology. He joined the National Petrochemical Company in Iran as a process engineer and research engineer.

Michel F. Fréchette is an expert on nanodielectrics. He spent 35 years as a senior scientist at the Institut de recherche d’Hydro-Québec (IREQ).

Claudiane Ouellet-Plamondon is a professor in the Department of Construction Engineering at ÉTS.