How a blind drone can serve as a relay for moving ground nodes? 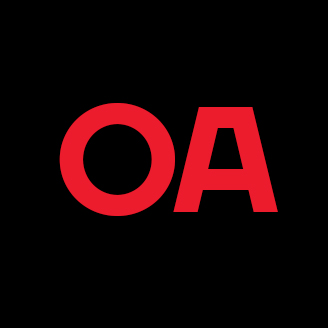 Abbas Chamseddine Author profile
Abbas Chamseddine is a Control and Aerial Navigation Expert at ARA Robotique Inc. and a lecturer at the ÉTS. He is a member of the Canadian Aeronautics and Space Institute and the Association for Unmanned Vehicle Systems International.
Program : Electrical Engineering
Research laboratories : LACIME – Communications and Microelectronic Integration Laboratory 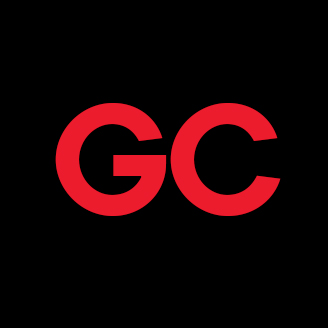 Denis Couillard Author profile
Denis Couillard is the Products Innovation Director at Ultra Electronics TCS. He has 30 years of experience in radiocommunication. 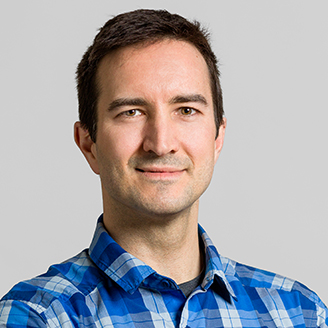 Samuel Gagné Author profile
Samuel Gagné is in charge of technological and IT applications in the Department of Electrical engineering at ÉTS. His areas of expertise include digital signal processing, wireless communications and software-defined radio.
Program : Electrical Engineering
Research chair : NSERC-Ultra Electronics Chair on Wireless Emmergency and Tactical Communications 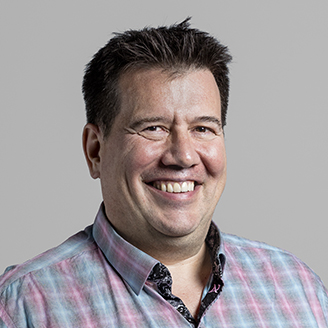 Maintaining continuous communication is an essential requirement for the success of any mission involving geographically dispersed units where information must be continuously shared and updated. This requirement cannot be always achieved especially for distant units operating in urban, mountainous and rugged area. This is because ground to ground mobile radios suffer from limited effective range and terrestrial radio signals are typically masked by obstacles. This problem gets more acute as the throughputs provided by the wireless links increase to support a multiplicity of IP services. One solution is to employ relays to repeat signals from one point to another or between various points to maintain broadband inter-connectivity, facilitate communications and extend range between units (Figure 1).

Aircraft, satellites and unmanned aerial vehicles (UAVs) can easily clear obstacles and dramatically expand communications links when deployed as relays. In recent years, UAVs gained an increasing attention due to their ease of operation and cost effective deployment. Moreover, avionics, embedded and control systems have known major advances which enabled the development of lightweight and autonomous UAV platforms mainly for military purposes. In 2009 Northrop Grumman demonstrated the communication relay capability with the Bat flying wing UAV. Later in 2011, Boeing successfully demonstrated a narrow-band communications relay aboard two UAVs, an Insitu ScanEagle and a portable AeroVironment Puma All Environment. During the demonstrations, the UAVs flew at a variety of altitudes while linking handheld military radios dispersed over mountainous regions 1. Very recently, the Defense Advanced Research Projects Agency (DARPA) has awarded L-3 Communications a $16.4 million contract to continue work on the mobile hotspot program. The objective of this program is to overcome the challenges of data transmission in remote areas outside of forward operation locations. This is to be achieved by developing a mobile millimeter-wave communications structure to connect soldiers in the field with forward-operating bases, tactical operations centers, and intelligence, surveillance, and reconnaissance assets2. As part of this program, radio and router pods containing mobile hotspot subsystems will be developed and mounted on Shadow UAVs to create UAV-borne mobile hotspots.

For these applications, the positions of the various ground nodes (such as soldiers, forward-operating bases and operations centers, etc) must be available whether for the pilot at the ground station or for the onboard autopilot in order to drive the UAV to the optimal position for communication relay. It is easy to see that in the case of two ground nodes, the optimal position would be somewhere between the nodes and closer to the one with weaker transmission signal. This can take place because soldiers are usually equipped with small handheld radios as compared to the operations centers. The positions of the ground units are usually measured by Global Positioning System (GPS). However, missions relying on GPS measurements are vulnerable and subject to failure due to GPS spoofing and jamming. This problem motivates our research supported by the Natural Sciences and Engineering Research Council of Canada (NSERC) and Ultra Electronics-TCS. The objective of our project is to propose navigation laws to drive a UAV to the optimal position between two ground units without relying on GPS signals. That is, the UAV is blind as it does not know the positions of the possibly stationary or moving ground units. With unknown positions of the ground units the optimal position to find and track is also unknown and the communication relay problem can be seen as real time optimization problem. Our proposed navigation law employs two measurements for each ground node, the signal strength and its angle of arrival. The altitude of the UAV is assumed to be constant and the desired linear velocities of the UAV are determined by projecting the signals strengths along the search plane using the angles of arrival. The proposed navigation algorithm is based on the idea that the angles of arrival will drive the UAV between the nodes while the signals strengths will determine the optimal position for relay. Extensive simulations and outdoor experimental tests have shown the navigation law to be very effective in both cases of stationary and moving ground units.

Starting with the simulation results, Figure 2 shows the behavior of the drone in the xy-plane when it is required to establish a communication relay for two stationary ground units represented by circles. The drone only measures the signals strengths and their angles of arrival from the units without knowledge of their positions. Several tests have been carried out with different initial conditions for the UAV. It can be seen that for all initial conditions, the drone is driven by the navigation law to the optimal position represented by the diamond shape. In this simulation, the two ground units represented by circles were assumed to be equipped with identical antennas and in this case the optimal position for communication relay is their midpoint. 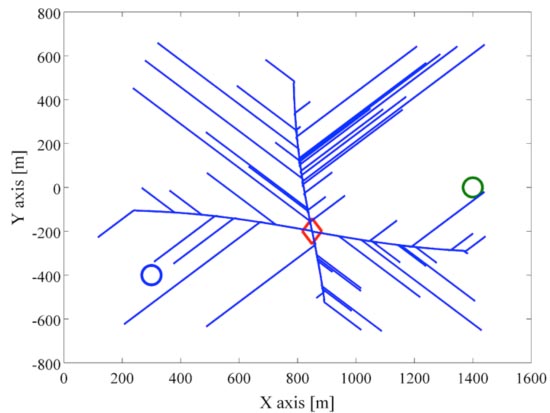 The navigation law has been also tested in the case of moving ground units. Similarly as before, two units equipped with identical antennas (Figure 3) are considered. The units start their mission at the circle and end it at the triangle. The drone initially starting at an arbitrary position (300,400) quickly finds and tracks in real time the time-varying optimal position (represented by the thick dashed line). 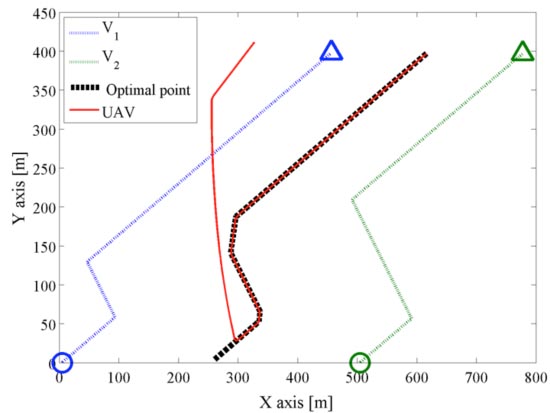 As for the experimental tests, they have been carried out using the AscTec Pelican UAV from Ascending Technologies. The Asctec Pelican UAV is shown in action in Figure 4 and a closer view is provided in Figure 5. 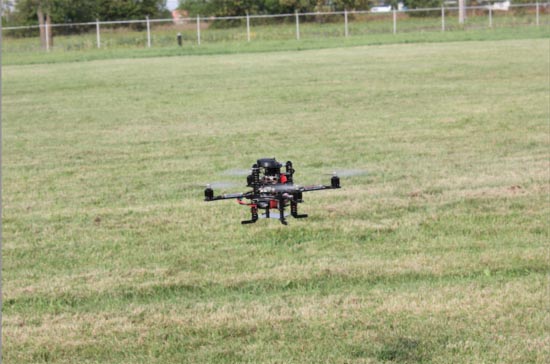 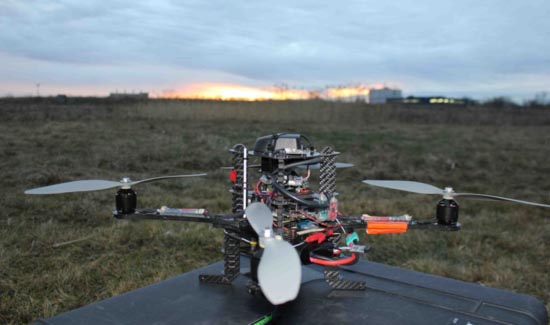 The experiments were realized outdoors with two laptops each equipped with an antenna. The first video shows the experimental results when the laptops are in stationary positions. Unlike the simulation tests when the antennas are assumed to be identical, in these experiments the signals are corrupted by noise, fading, reflection and attenuation therefore providing for a much more realistic environment.

The second video shows the experimental results when one of the antennas is moving. The data issued from these experiments are plotted in the third video. It is clear that the drone is able to find and to track in real time the time-varying optimal position without any knowledge about the antennas positions and using only the signals strengths and their angles of arrival.

This work is supported by the Natural Sciences and Engineering Research Council of Canada (NSERC) and Ultra Electronics-TCS. For more information about this project, please contact Professor Ouassima Akhrif or Professor François Gagnon.

Ouassima Akhrif is a professor in the Electrical Engineering Department at ÉTS. Her research interests are bifurcation analysis, nonlinear geometric and adaptive control, and drone and flight control.

Abbas Chamseddine is a Control and Aerial Navigation Expert at ARA Robotique Inc. and a lecturer at the ÉTS. He is a member of the Canadian Aeronautics and Space Institute and the Association for Unmanned Vehicle Systems International.

Guillaume Charland-Arcand has a master degree in Electrical Engineering from the ÉTS. His thesis is on nonlinear control applied to quadrotor helicopters. Leader at Dronolab, he has founded ARA Robotique, an incubated company at Centech.

Denis Couillard is the Products Innovation Director at Ultra Electronics TCS. He has 30 years of experience in radiocommunication.

Samuel Gagné is in charge of technological and IT applications in the Department of Electrical engineering at ÉTS. His areas of expertise include digital signal processing, wireless communications and software-defined radio.