The Kollide-ETS group, bringing together ÉTS (École de technologie supérieure) researchers Éric Wagnac and Yvan Petit, and the Kollide consortium of four Montreal companies—Kupol specialized in 3D design and printing, Shapeshift3D in product customization, Numalogics in digital simulations, and Tactix in sports equipment design—received grants of $320,000 from the NFL Helmet Challenge and of $173,000 from MEDTEQ to develop the ultimate football helmet. Kollide-ETS will submit a prototype at the closing of the competition in July 2021. The goal of the competition is to create a laboratory-tested helmet that will provide more protection than any other helmet currently used by NFL players. 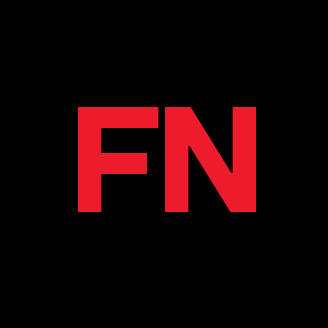 Risks of concussion related to the practice of football are known to both specialists and to the general public. In 2017, 281 concussions were recorded in the National Football League (NFL). In 2017, a study published in the Journal of the American Medical Association (JAMA), following the autopsy of about 100 professional players, concluded that nine out of ten players suffered chronic brain degeneration caused by repeated shocks to the head during their career.

Young people are also affected. A survey showed that almost half of them reported concussion-like symptoms in a single football season.

Despite widespread attention focused on this phenomenon, helmets have changed little in recent years and do not offer sufficient protection, mainly because of their improper fit with the player’s head, and the inability of the protective pads to redirect impact energy in strategic directions.

An Innovative Approach for Increased Protection

The technological solution proposed by the Kollide-ETS group is based on the optimization and customization of 3D-printed lattice structures (patent pending by Kupol), designed to act as protective pads inside the helmet.

This lattice structure was selected because of its many advantages: 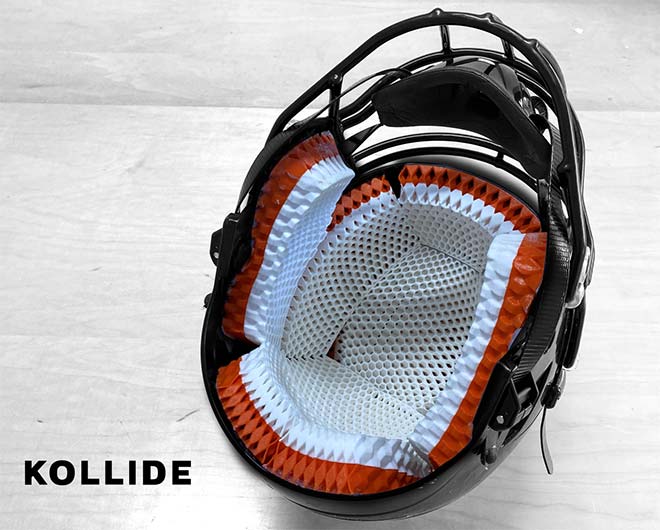 After characterizing the mechanical properties of elastomer materials derived from additive manufacturing processes, a virtual model of the structure will be created using the finite element method and then validated experimentally. This virtual model will be used to compare an infinite number of designs and analyze how the lattice structure geometry—cells shape, density, membrane thickness—affects the behaviour of the pad. The objective is to maximize energy absorption in preferred impact directions, such as for pure compression loading from direct impacts or combined compression and shear loading during angular impacts. A virtual model of the complete helmet will also be subjected to the same impact tests used in the NFL to test helmet performances, and will determine the size and arrangement of the pads to minimize head accelerations in multiple directions. 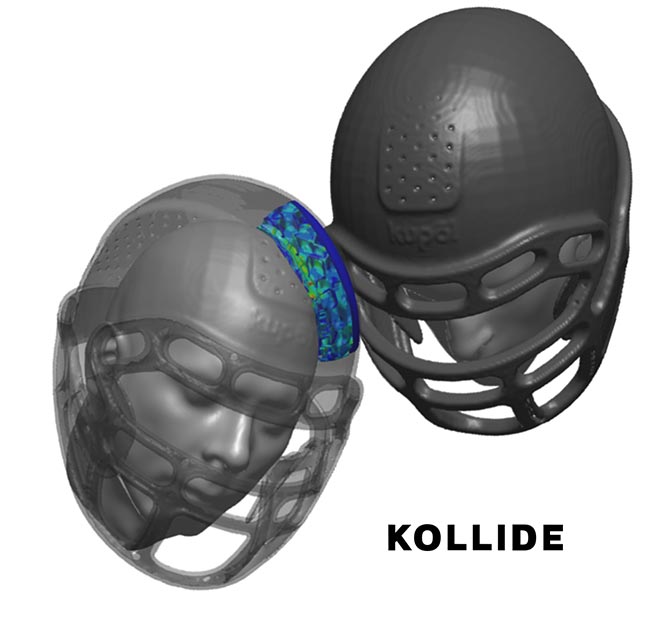 Acquiring the Geometry of the Player’s Head

The proposed helmet, custom-made for each player, requires a 3D scan of the head. The preferred technology is already integrated in the latest smart phone models. This accessibility would allow players to acquire the data from the comfort of their own homes. Validation efforts are presently being conducted to ensure that these technologies are accurate enough for head scanning.

Once the architectural pads are optimized and customized to the player’s head, they will be manufactured using a non-planar 3D printing technique, which consists of printing the pads along the curvature of the head, unlike the traditional method of printing a part layer by layer on a flat surface. The non-planar 3D printing of the lattice structure produces pads with increased mechanical properties, manufacturing quality and better adapted to the morphology of each person without altering protection. 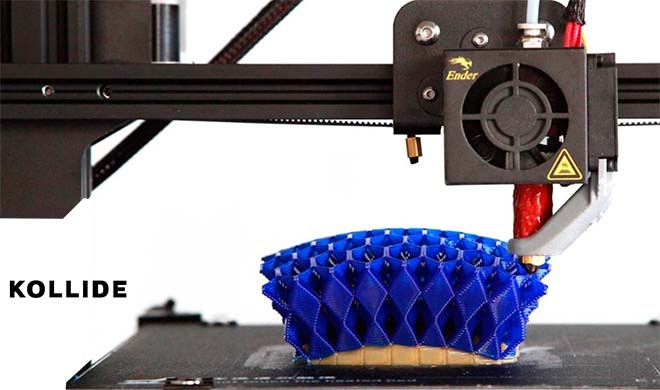 Franck Le Naveaux is in charge of scientific research at Numalogics.