Following in the Footsteps of the Autoplane: The Autodrone - By : Caroline Lecours, 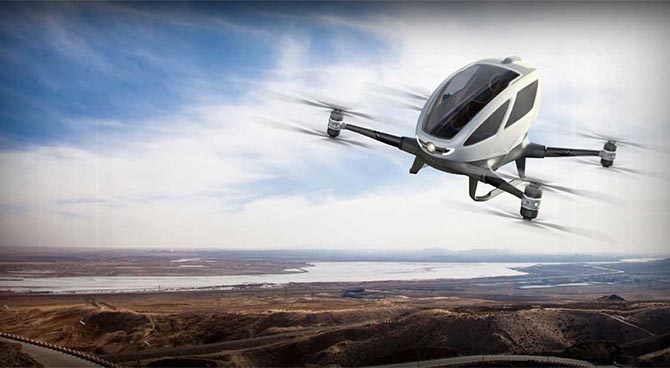 Flying cars or autoplanes have been in development for several decades, but unfortunately, they are still not commercialized. Although autoplanes are generally designed as miniaturized versions of aircraft, different concepts have also emerged, like the Flike flying motorbike. Autoplanes and flying bikes are still at the prototype phase; several trials and analyses remain to be done before the marketing process can begin.

Meanwhile, a different concept is now being proposed, the EHANG 184 from EHANG, Inc., a company specialized in drones, such as commercial drones and drones paired with personalized virtual reality (VR) glasses. The company was inspired by these drones to create an autodrone or “passenger drone”. Unlike the autoplane, which usually has aircraft wings, the EHANG 184 model works with rotors.

Differences Between the autodrone EHANG 184 and the Flike Bike

This system resembles the Flike bike, but like current drones it has eight rotors instead of six. The EHANG 184 is also equipped with a one-seater cockpit, while the Flike bike does not have one.

The EHANG 184 is mainly composed of carbon fiber reinforced composite materials and epoxy. It weighs 240 kg and can carry one person and a small suitcase in the 45 cm back-storage compartment, for a maximum payload of 100 kg. The Flike bike also weighs 240 kg and can also carry a 100 kg payload. The cockpit of the EHANG 184 model can fly up to 3,500 meters above sea level, compared to 30 meters with the flying bike. The average speed of the EHANG 184 is 60 km/h and the batteries allow it to make a 25-minute journey, whereas the Flike’s estimated capability is 30 to 40 minutes.

The most important difference between the EHANG 184 model and the Flike bike and other flying cars is its autopilot system. The EHANG 184 is not driven by the user, but rather by an automatic system in which information such as destination and pathway is entered. The user can therefore simply enjoy the landscape, stress-free.

Like current drones, autodrones can lead to the risk of accidents with other aircraft. Usage regulations remain to be established. However, Dubai has already chosen to test the EHANG 184 model as a new form of taxi transport, as featured in the promotional video below. The introduction of these taxis was scheduled for July 2017, but we have not been able to confirm that this has actually occurred.