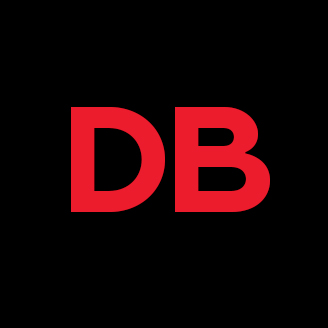 David Barry Author profile
David Barry is a Master student at ÉTS and works as a R&D mechanical engineer at Argon 18. He was responsible for the design, structural analysis and mechanical testing of the stem.
Program : Mechanical Engineering 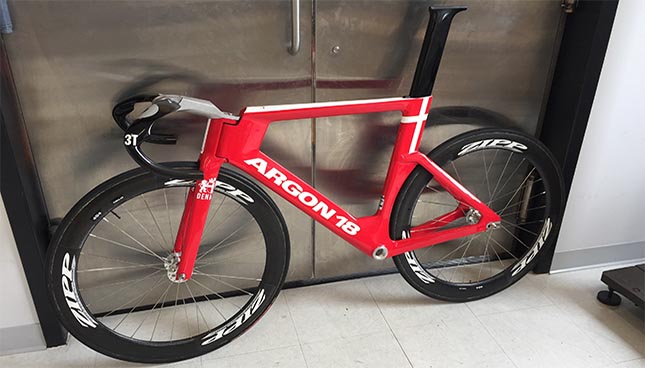 High level athlete’s performance in disciplines such as cycling can sometimes be maximized by personalizing their gears for the specific requirements. Additive manufacturing technologies are interesting in this context as they allow rapid anufacturing of components and eases the transition from the design to the experimental validation.  This article describes the development of an aluminium race bike stem that was used by Lasse Norman Hansen, bronze medallist at the Omnium competition at the 2016 Rio Olympic games. The stem was manufactured via the powder-bed selective laser melting (SLM) technology and fatigue tested according to ISO standard 4210-5.

Additive manufacturing is seen as a promising technology allowing designers to create complex components without too many manufacturing constraints. ÉTS research chair on engineering of processing, materials and structures for additive manufacturing was recently involved in a project with Argon 18 to manufacture a personalized integrated bicycle stem for Lasse Norman Hansen, a Danish athlete who competed in the Rio Olympics in track cycling. 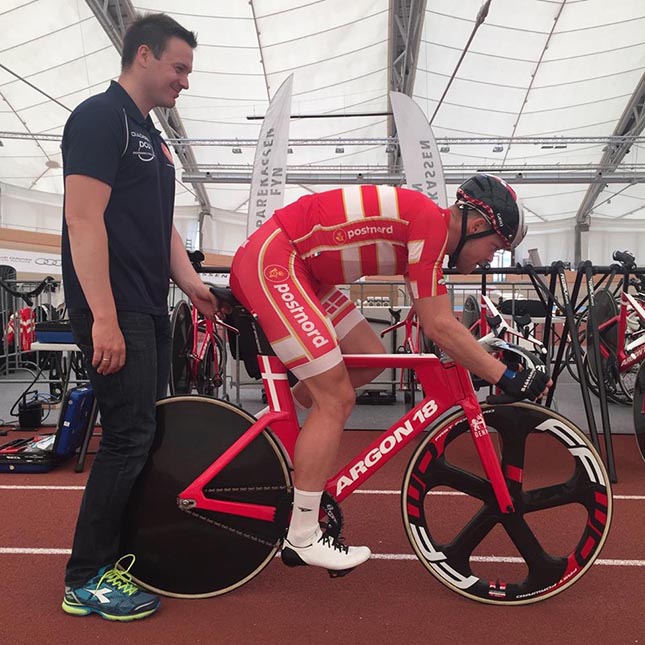 Track cycling is an old discipline; it started in the 1870s, in England, where cyclists raced on indoor wooden tracks similar to the modern ones. Lucrative events could take place as it was possible to control the crowd and charge an entrance fee. It has been part of every modern Olympics since 1896 with the exception of 1912 where only a road race was organised. Several events take place on the 250 m wooden track; they are mostly short efforts (sprints) and endurance efforts. In the sprints, athletes can reach speeds well above 70 km/h while speeds are closer to 60 km/h for a 4000 m endurance effort.

Argon 18, a Montreal-based bicycle manufacturer, was in charge of designing the Danish national team’s new track bike for the Rio Olympics. Their team specializes in endurance events such as the team pursuit and the omnium. In order to position itself above the competition, Argon 18 aimed at developing a bike that is stiffer, more aerodynamic, more efficient and highly integrated. Each event at the track cycling competition has its very specific rules regarding the equipment. There are limitations regarding the athlete’s position and bike components have to be designed respecting these limitations while, at the same time, optimising the athlete’s performance. Argon 18 approached ÉTS to manufacture a personalised stem for Lasse Norman Hansen that was used in the Flying Lap event, which consists of achieving the fastest lap from a moving start.

Development of the Aluminium Stem

The development of the stem for additive manufacturing poses several challenges in terms of design as well as manufacturing. While the static properties of the aluminium alloy employed in the additive manufacturing are well documented, defects and surface conditions can significantly affect the fatigue life of this alloy (Aboulkhair et al., 2016). Moreover, the values of the loads that the component will withstand are unknown.

To maximize the aerodynamic performance of the athlete, the new-designed stem should be seamlessly integrated into the frame of the bike, while being firmly fixed to the fork insert. By personalizing the stem design, it is also possible to guarantee the optimal position for the athlete. Furthermore, the stem must also be sufficiently stiff (better than its carbon fiber counterpart) and lightweight. Note however that contrary to road cycling, track cycling does not imply climbing hills and, therefore, minimizing the weight is not the highest of our design priorities. That means that the use of additive manufacturing could be even more advantageous for the case of road cycling, since this technology is especially effective to produce lightweight structures.

The final design of the personalized stem is shown on the figure below. The stem is composed of three parts which are the plastic cover (1), the stem body (2) and the stem clamp (3) As the component is principally solicited in torsion, the main section of the stem is a thick wall tube. As the aft-most part is not solicited, a plastic cap is used in an effort to reduce weight. The stem clamp is made of the same material as the stem and is bolted to the stem body to firmly hold the handlebar.

Structural Analysis of the Components

A linear stress analysis was conducted with Altair HyperWorks to validate the design of the stem body and the stem clamp. The aim of this analysis was to ensure that the stem stiffness would be greater than what is typically observed for carbon fibres. Given the properties of the material (YS of 230 MPa and UTS of 345 MPa) and the fact that the fatigue behavior can be influenced by the material  microstructure  (Brandl et al., 2012; Tang et Pistorius, 2017), the proof stress limit was fixed to 100 MPa. The load case corresponds to the application of a force at the handlebar extremity; the stem is retained on the fork with 4 bolts. The force magnitude was determined by experiments conducted by Argon 18 and are not given here. The stress analysis identified several dimensions to adjust in order to preserve the component reliability, such as the thicknesses of the tubular section and the handlebar clamping section. 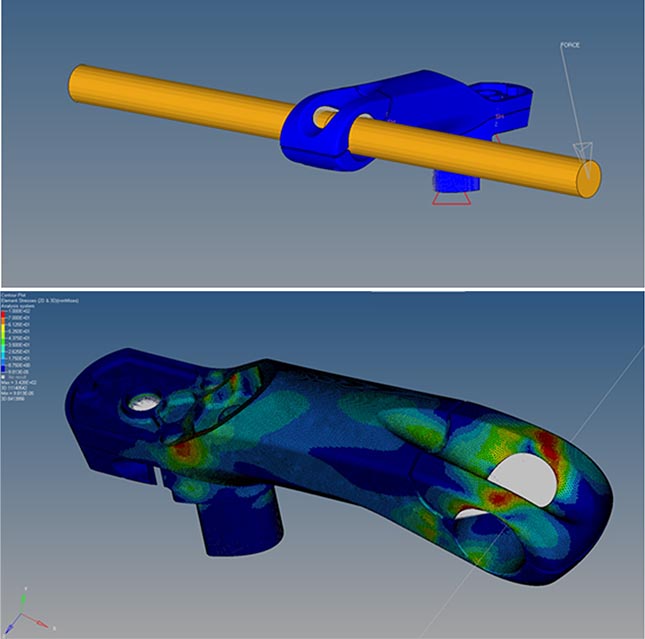 Additive Manufacturing of the Stem

The additive manufacturing (AM) technology used to manufacture the stem is the powder-bed selective laser melting (SLM) technology. SLM technology uses a laser to consolidate particles of a powder evenly spread over a plane surface; thousands of layers are sequentially melted to obtain the final part (Herzog et al., 2016). The material selected for this application is an aluminium alloy (AlSi10Mg). Despite the fact that the thermal expansion coefficient of aluminum is higher than that of titanium, his melting temperature and stiffness are much lower, which result in lower thermal stresses and in the possibility to orient the part parallel to the building platform with the objective to minimize the manufacturing time and the quantity of support to be removed; we also made sure that no subsequent machining would be required. The support designed to retain the two aluminium components of the stem (the body and the clamp) during manufacturing are shown below. 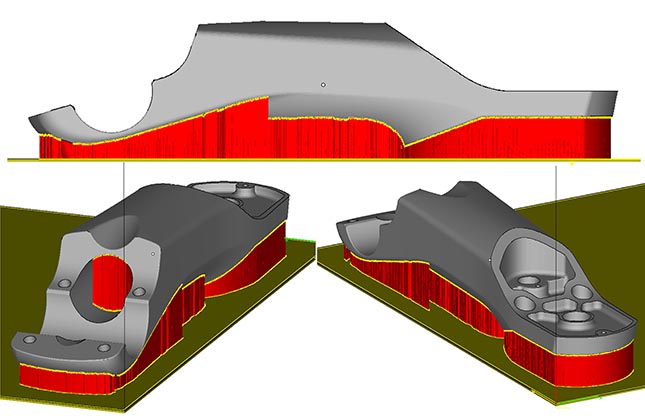 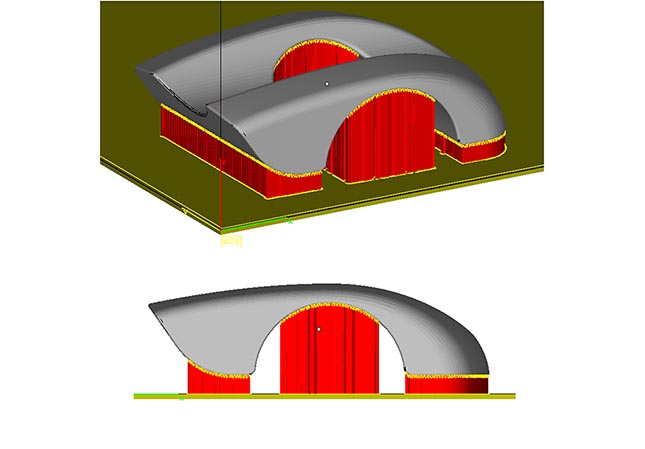 The two finished stem are shown in the figure below. 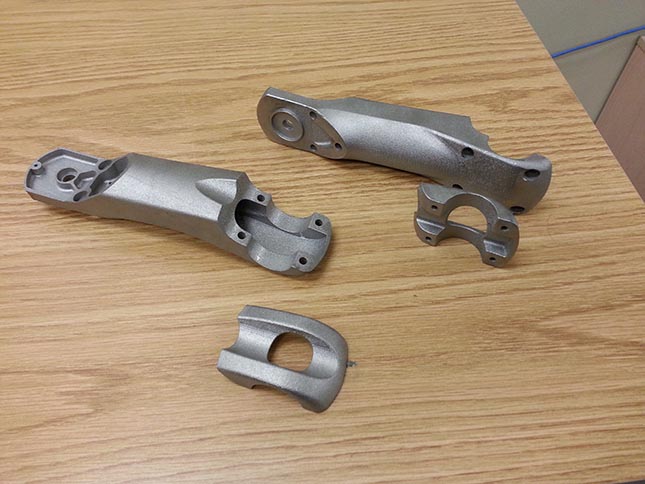 Fatigue Testing of the Stem

As one would imagine, a failure of this component at high speed during an Olympic competition would be catastrophic. For this reason, 2 extra stems were manufactured for fatigue testing. A test bench was developed where the stem was fixed the same way it was mounted on the bike, the test developed according to ISO 4210-5 standard. The test was displacement-controlled and a total of 60,000 cycles were performed at a displacement of +/- 2mm and a frequency of 1Hz while monitoring the force. The tests were carried out successfully, no significant loss of rigidity or cracks were observed during testing. A good correlation with the stress analysis was observed; the stiffness proved to be higher than that of the fiber reinforced composite stem it was replacing.

The stem developed could be successfully manufactured using SLM technology. The Danish athlete Lasse Norman Hansen achieved a time of 12.832s, a stunning 70.1 km/h at the flying lap competition making him fourth. He ended up bronze medallist at the Omnium competition.

Jean-Rene Poulin is a Ph.D student at ÉTS, working on the damage tolerance of lattice structures obtained by additive manufacturing.

David Barry is a Master student at ÉTS and works as a R&D mechanical engineer at Argon 18. He was responsible for the design, structural analysis and mechanical testing of the stem.