Julien Chaussée Author profile
Julien Chaussée is an engineering specialist in the Aeronautical Product Development division of Bombardier. He works on the development, integration, and deployment of new technologies for future Bombardier aircraft structures.

A team of students from the École de technologie supérieure (ÉTS) in Montreal, accomplished quite a feat: to participate in the 2015 « Little Cup » World Championship, in Geneva. In spite of limited financial resources the adventure was a success, thanks to the determination of each team member and the advanced technologies available at the ÉTS. With these different technologies, the students were able to increase the strength-mass ratio of the mast foot and its support, thereby improving the takeoff speed of the Catamaran.

The ÉTS is home to a group of boating enthusiasts who carried out a project of international scope: the design and manufacture of a C-Class catamaran to participate in the World Championship which showcases the technological developments in this Class (Figure 1).

These catamarans, 25 feet (7.6 m) long and 14 feet (4.3 m) wide, are known worldwide for their exceptional performance. Equipped with rigid wings and lifted on “hydrofoils”, they literally fly above the water, reaching speeds of 60 km/h, and can exceed three times the speed of the wind. The participation of the student club at the “Little Cup” World Championship would not have been possible without the experience of the ÉTS in the advanced technologies that helped optimize the ratio between resistance and mass of certain structural parts of the catamaran, thereby improving the take-off speed of the sailboat. To this end, two essential structural elements of the catamaran, the mast foot and support (Figure 1), were optimized in order to decrease their respective masses. Additive manufacturing, a shaping process at the cutting edge of technology, was used for the manufacture of these two components, as their complex shapes would have been difficult to produce using conventional forming processes. 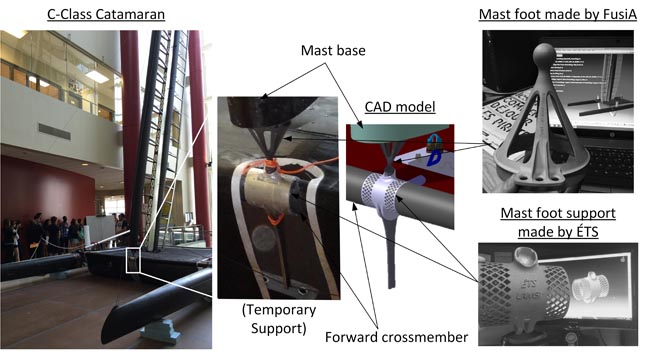 Figure 1 Mast Foot and Support of the Catamaran

The mast foot and support constructed under this project are the main components of the catamaran. The mast foot is positioned on the mast and its support is in the middle of the forward crossmember (Figure 1). These two parts are used to control and move the wing, while allowing the forward crossmember to handle the compression of the mast. The rigidity of the catamaran is obtained through the tension exerted by different ropes. Consequently, these parts must be able to withstand compressions of 15,000 N (3,375 lbf) before applying the safety factor.

Manufacturing of the Mast Foot and its Support

The Shape Memory Alloys and Intelligent Systems Laboratory (LAMSI), and the ÉTS Research Chair on Engineering of Processes, Materials, and Structures for Additive Manufacturing (CIFA) host an additive manufacturing system device (AM) which uses the selective laser melting technology (SLM). Since its acquisition in 2014, this system was used for the realisation of many projects both academic and industrial. The mast foot support of the C-Class catamaran was additively manufactured by SLM using aluminum powder (AlSi10Mg).

Preparatory work should always be done before the SLM process of any component. This work is divided into three steps: selecting the orientation of the manufactured component, creating a support structure, and adapting the design for the AM. Figure 2 shows the preparatory process leading to the additive manufacturing of the mast foot support. 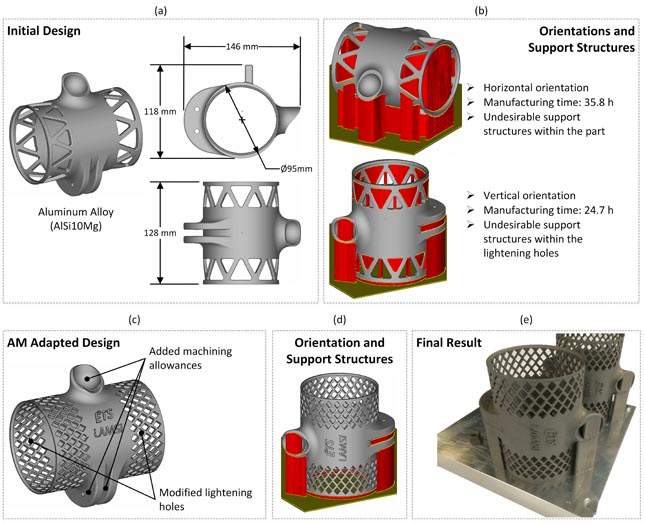 Figure 2a shows the CAD model from which the preparatory work began: the external measurements and the different characteristics of the part were studied in detail. From the information gathered, two component orientations during manufacturing were proposed and support structures were created, using the commercial software module Magics SG Module (Materialise, Belgium) (Figure 2b). Then, different options were evaluated and a decision was made as to the best possible orientation to select: the horizontal orientation has a higher manufacturing time than the vertical one (35.8 h compared to 24.7 h) and requires a considerable amount of support structures within the part. Therefore, the vertical orientation was selected, since the support structures for the horizontal one would have increased the buy-to-fly ratio of the part and required a lot of time in manufacturing and machining.

Finally, two mast foot supports were built, in order to have one master part with the support structures still included (Figure 2e), and several post-manufacturing steps were carried out in order to deliver the other part to its final state:

In parallel, FusiA, a Montreal-based SME specialized in the manufacturing of metal components with SLM, took over the additive manufacturing of the mast foot. The same aluminum alloy (AlSi10Mg) and the same manufacturing parameters were used. The design of this mast foot was done by topology optimization, with the help of the Altair Hyperworks software to maximize the benefits of additive manufacturing. The software helps the designer minimize the quantity of the material used, thereby reducing mass, while maximizing rigidity and load-bearing capacity. The result is a cone with six branches, weighing about 200 g, which supports the entire compression of the mast. The use of additive manufacturing also facilitates integration of the anchor points for some of the wing systems. As with the support shown earlier, the design also served to minimize the need for support structures during the melting process.

Once completed, the mast foot and support were glued to the base of the mast and to the forward crossmember of the catamaran respectively (Figure 1). High-quality bonding was essential since rotation of this part on the crossmember would have caused the fall of the rigid wing and, surely, the destruction of the catamaran.

The entire project was a success: the ÉTS catamaran, designed and built by students, participated in the world championship which features the advancements in research and development. Other sailors were impressed with the parts manufactured with the SLM method and the low cost of the overall project, more than 26 times lower than that of the winning team. The ÉTS team finished in 6th place. In addition to a trophy, the team came back with a renewed desire to pursue the adventure. The complex parts of the next catamaran will also be made by additive manufacturing to minimize their mass. This process will help continue to optimize the structural parts.

For more information on the Rafale C-Class student club, visit their website at:

Xavier Grossmann is a former master's student in mechanical engineering at École de technologie supérieur (ÉTS) and co-captain of the catamaran C-Class project. His research work dealt with the design and manufacture of the hydrofoils for the catamaran.

Julien Chaussée is an engineering specialist in the Aeronautical Product Development division of Bombardier. He works on the development, integration, and deployment of new technologies for future Bombardier aircraft structures.