A New 3D Printer Can Print 10 Materials at Once - By : Substance,

A New 3D Printer Can Print 10 Materials at Once

On August the 25th 2015, MIT’s (Massachusetts Institute of Technology) Computer Science and Artificial Intelligence Laboratory (CSAIL) has announced the creation of a new 3D printer, the MultiFab, which can build objects composed of up to 10 different materials in a single run without assembly and at reasonable cost. Other printers designed to build functional objects are typically able to manage up to three different materials at the time and cost as much as $250,000 (US dollar).

A machine vision system combined with a feedback loop enables the overall cost reduction for this $7,000 printer. It is a non-contact system that scans the layer, detects errors and generates appropriate corrections with a delivering resolution of about 40 microns. Expensive mechanical components are no longer required. It also allows printing around existing objects. For example, it can embed circuits and sensors directly onto the body of an object. This approach allows the use of cheap materials without compromising on accuracy. 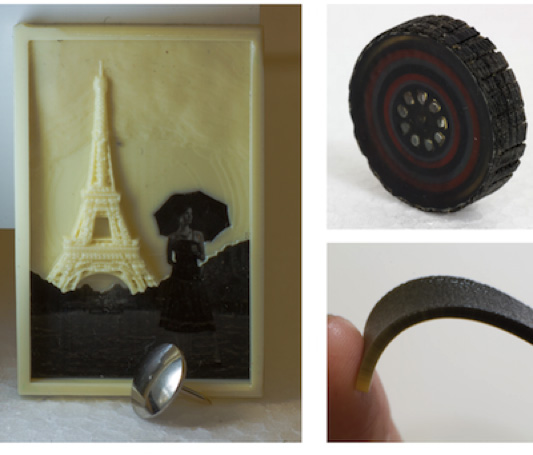 The scientists managed to produce a wide range of objects, from optical and LED lenses and fabrics to fiber optics bundles and complex meta-materials. They also created a plastic holder for a metal razor blade and a perfectly-sized case printed around a smartphone, which had been directly put into the printer.
The breakthrough with such printer would be to combine materials to obtain desired mechanical, optical or semiconducting properties. Its limitations are its relative slowness and its difficulties with scanning certain types of surface (ex. mirror finishes). Also, this printer resolution could be even better by using a more expensive printhead, though it would increase its cost.