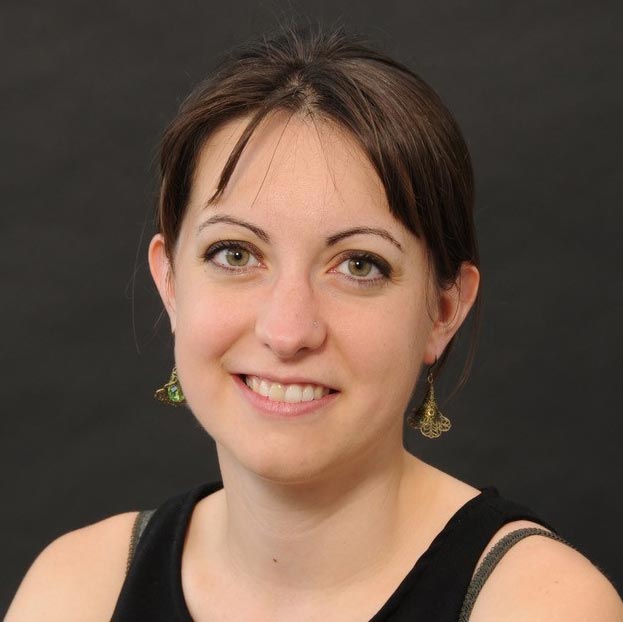 Claire Grosset Author profile
Claire Grosset is a specialist in zoological medicine at the Centre hospitalier universitaire vétérinaire and assistant professor at the Faculty of Veterinary Medicine, Université de Montréal. 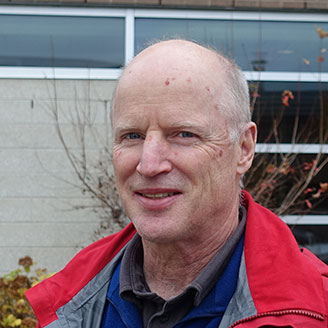 Yvan Dumais Author profile
Yvan Dumais is a clinician in the dentistry department at the Centre hospitalier universitaire vétérinaire and a professor at the Faculty of Veterinary Medicine, Université de Montréal. 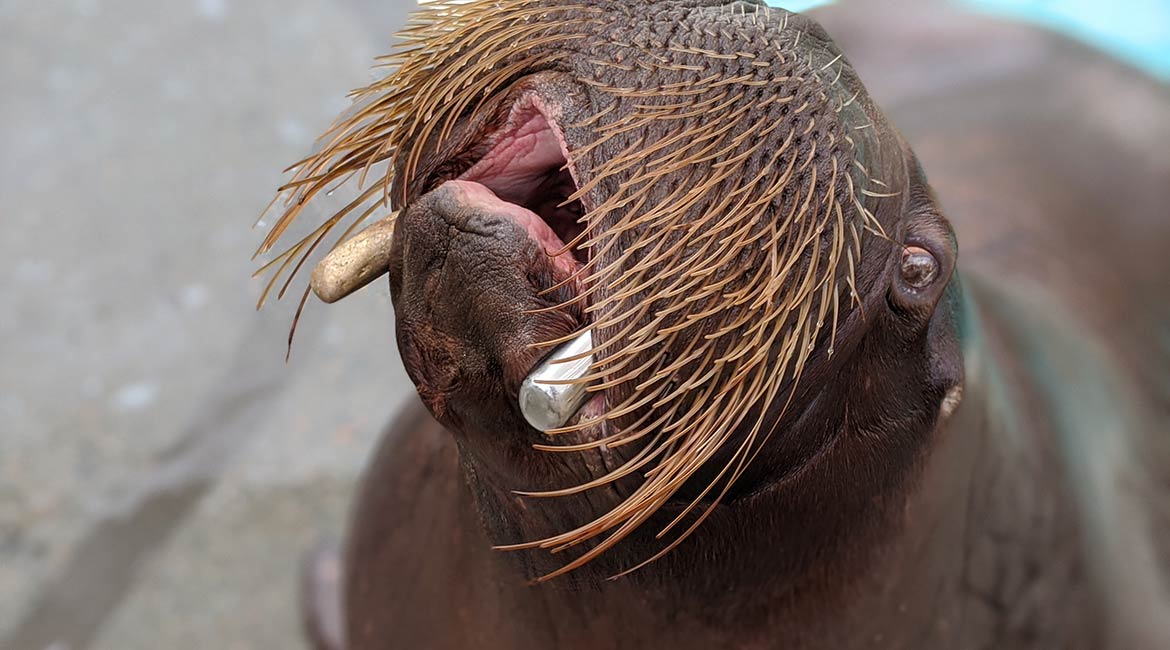 Photo from the authors. CC License.

The conservation status of walrus (Odobenus rosmarus) in Canada is an area of concern due to anthropogenic factors and global warming. A walrus colony, now extinct, used to populate the Gulf of St. Lawrence in the 18th century. In order to raise public awareness about their conservation and to learn more about this species, zoological institutions keep walruses and contribute to their reproduction. The Aquarium du Québec has four of the 18 walruses currently found in zoological institutions in North America. Preventive care and increasing the population of these pinnipeds require significant resources, namely in terms of time, personnel and veterinary care. In preventive medical care, addressing dental abscess in the tusks is a priority. As the name “Odobenus” implies, the walrus is an animal that “walks with its teeth,” relying on its tusks to pull itself out of the water. While this is not a problem in a natural environment made of ice and earth, it is not so in a habitat made of concrete, metal, and other materials that were chosen to support animals weighing more than a ton.

To prevent tusk fractures and cracks, a currently recommended practice is to preserve walrus tusks with custom-made metal protectors (prosthetic crowns).1 This technique helps avoid the need to remove the tusks, an invasive procedure for the animal. Walrus tusks grow continuously at their base and some creatures tend to rub them against objects in their environment. For this reason, prosthetic crowns need to be replaced frequently during walrus lifetime. Strength and congruity are essential qualities for these crowns to ensure that they remain as long as possible on the walrus tusks, while mitigating metal wear and oxidation in salt water. Also, the crowns must be polished to avoid any mouth discomfort or cause the walrus to get stuck in its environment or to fracture the tusk.

To date, 3D printing had not yet been used to make prosthetic tusk crowns. Also, the ideal metal for these crowns had not been determined and varied from one institution to another: aluminum, bronze, ticonium, titanium, or chromium cobalt alloy.2 The objective of this project was to determine which metal would provide the best resistance to repeated friction and compression by a walrus, and to describe the fabrication and installation of a 3D-printed prosthetic crown.

An additional challenge during dental procedures in walruses involves the anaesthetic risks related to diving responses and physiological changes that occur during apnea.3 Anaesthetic mortality is especially high in this species, although successful anaesthetic procedures have been reported at the Aquarium du Québec.4 To avoid anaesthesia, the procedure requires that the animal be cooperative while taking the dental impression with polyvinyl siloxane (PVS) and gluing the prosthetic crown to the tusk. These steps require that the walrus remain completely still for 4 to 5 minutes. Training was conducted 3 to 4 times a day for all walruses at the Aquarium du Québec, and the procedure required 11 months of preparation with a 4-year-old female subject. The trainer gradually increased the length of immobility required by using a positive reinforcement technique with the help of palatable prey.

The design and manufacturing process of the prosthetic crown began by taking an impression of the tooth. A PVS-filled impression tray was placed on the walrus tooth. The walrus remained motionless for 5 minutes after which the impression tray was removed. The impression was checked for accuracy before it was used to make a plaster replica of the tooth using a casting process (Figure 1b). The replica was then scanned with a GoScan 20! Scanner (Creaform), providing a resolution of 0.1 mm. The scan was cleaned, transformed into a surface model and then into a solid model with CATIA V5 computer-aided design software. The prosthetic crown was then designed based on this scanned tooth, offering a perfectly fitted contact interface.

Figure 1: a) Polyvinylsiloxane impression of the tooth, b) plaster replica of the tooth (provided by Dr. Dumais), and c) digital model of the replica in the CATIA environment.

Indeed, the prosthetic crown design had to meet specific geometric and wear resistance requirements. The crown had to be between 3 and 4 mm thick and follow the contour of the gingiva at a minimum distance of 2 mm (Figure 2a and b). The length of the crown was dictated by the actual length of the tooth: 2/3 of the crown was to be in contact with the tooth and 1/3 could protrude beyond the tooth. Also, to ensure a good fit between the crown and the tooth, an epoxy resin was used, requiring a spacing of ~0.3 mm between the two bodies. However, the accumulation of potential errors at each step—from taking the impression to installing the crown on the walrus tooth—required the design of several crowns with three functional clearances (0.25, 0.35, and 0.45 mm) to maximize the chances of a proper fit. In addition, to avoid the formation of air pockets inside the crown during installation, an evacuation tunnel with a diameter of 0.7 mm was added to the design, as shown in Figure 2c.

Figure 2: Prosthetic crown design: a) Crown thickness, b) view of the crown contour adapted to the gingiva, and c) view of the evacuation tunnel.

The material chosen for this dental crown was cobalt-chromium, an alloy commonly used in the manufacture of dental prostheses due to its high resistance to corrosion and wear. This alloy was developed in 1932 by Albert W. Merrick for Austenal Laboratories. It was specifically developed for the dental field and for the replacement of artificial joints—hence its trade name “Vitallium”. It is one of the hardest alloys currently available for 3D printing and, unlike some steels, it does not require a hardening heat treatment, which simplifies the fabrication process of the crown.

Once the crown concept was validated by veterinarians, it was possible to produce the crown with an additive manufacturing system. The technique employed was laser powder bed fusion using an EOS M280 system. Supports were created to attach and stabilize the crowns on the build plate during manufacturing, and the models were sliced in layers and sent to the printer (Figure 3).

Figure 3: a) build plate with crown supports (red), and b) fabricating the crowns

The build plate was removed from the chamber at the end of printing (Figure 4a.b). A residual stress-relieving heat treatment (1050 °C for 2 hours) was performed before the crowns were separated from the build plate. The finishing step involved sandblasting and mechanical polishing (Figure 4c).

Installing the Crown on the Walrus

The prosthetic crown was installed on September 29, 2020, at the Aquarium de Québec by Dr. Dumais. It was possible to keep the walrus still for 5 minutes (Figure 5a), ensuring complete curing of the epoxy resin. In Figure 5b, the old bronze crown and the new CoCr crown can be seen together. The hardness of both materials was measured at 90 and 370 respectively on the Vickers scale, indicating that the CoCr crown is approximately four times harder. In comparison, bronze has a hardness similar to aluminum alloys and cobalt-chromium is harder than some medical-grade stainless steels like 316L.5 This suggests a much longer service life for the CoCr crown. 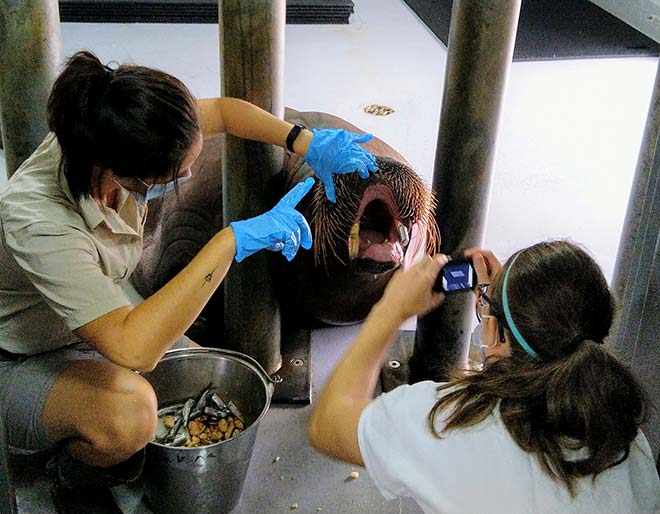 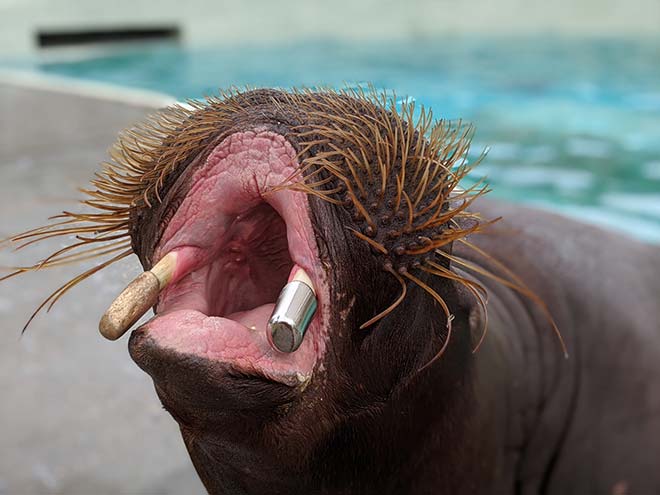 One month after the procedure, the female walrus is doing well and the crown shows no signs of wear. This 3D printing project could pave the way for future applications, such as the development of crowns with replaceable distal parts on walruses, or the development of other types of saltwater-resistant prostheses for aquatic animals.

Anatolie Timercan is a PhD student at the Shape Memory Alloys and Intelligent Systems Laboratory (LAMSI) at ÉTS. His project focuses on the modelling and additive manufacturing of architectural structures for medical devices.

Claire Grosset is a specialist in zoological medicine at the Centre hospitalier universitaire vétérinaire and assistant professor at the Faculty of Veterinary Medicine, Université de Montréal.

Morgan Letenneur is a postdoctoral fellow at LAMSI laboratory of ÉTS. His areas of research are 3D printing of metal alloys, non-destructive X-ray control and fracture mechanics.

Yvan Dumais is a clinician in the dentistry department at the Centre hospitalier universitaire vétérinaire and a professor at the Faculty of Veterinary Medicine, Université de Montréal.