A 3D Printed Frame Assembly for a Quadrotor Drone

Tensile and bending tests were carried out on standardized samples with the objective of acquiring the basic mechanical properties of nylon and fiberglass plies. The overall properties of the nylon/glass composite manufactured with the Mark One printer were determined in this way. These results were then validated by using more complex samples that were representative of the part to be manufactured, which were experimentally tested and compared with results from numerical simulations.

The lower plate of the chassis is thin (1.5mm), and it is subject to the weight of the batteries and payload. It was preferable to check the reliability of this part of the frame assembly, particularly since the plate in the current Dronolab version is made of composite material reinforced with very performant carbon fibers. A numerical model was built, and the plate was modeled with the help of ANSYS Mechanical APDL 15.0.

The batteries are held in place on the plate by straps attached to supports and rectangular slots (see Figures 1 and 2). 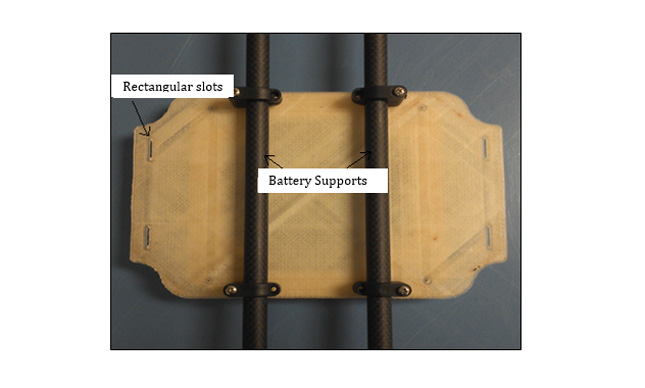 The battery is anchored at four points that are attached to the plate and we consider that its weight is equally distributed. The supports are not modeled, only the forces on the rectangular slots are taken into account, and they will have a tendency to bend the plate towards its center.

Moreover, a surface pressure is evenly distributed on the central portion of the plate and applied with the objective of simulating the weight of a payload. This value is progressively increased so that its influence on the structure could be observed if the drone had to support a heavy payload.

Finally, the support area pressure point, which was modeled by a ring around the screw hole, is restrained from any movement.

The stresses along the natural axis of the composite were determined for each layer. After calculating these stresses, maximum strain and the application of failure criteria, it was verified that the part did not break under normal working conditions. In fact, on ANSYS the integrity of the material is normalized to 1. So for a given criterion, if the value calculated by ANSYS is higher than one, the software will predict material breakage. 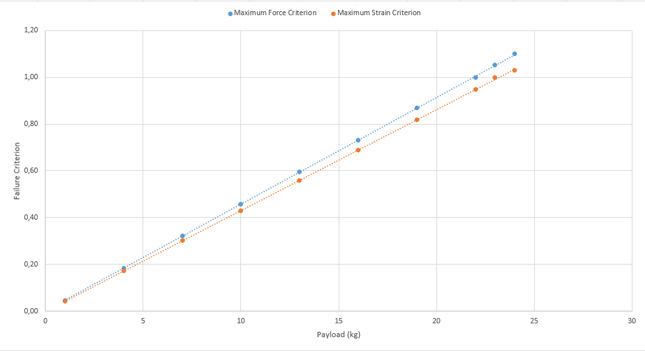 After this validation, the part was manufactured (Figure 4a), and the printing lasted 39 hours. Tests were subsequently carried out to study the behavior of the frame assembly under conditions that simulated propellers maximum thrust, which can take place during lift-off. A comparison with the current Dronolab frame assembly (Figure 4b), under the same conditions, was also carried out.

First of all, the old and new drone frame assembly were mounted in an identical manner. The arms and batteries were installed (see Figure 5 a, b).

The drones were then placed hanging between two supports of the same height and in such a way that the arms could not move (Figure 5c).  Weights were used to increment a force in the frame assembly center to simulate the propellers thrust. A touch probe measured deflection at the center of the drone, for each increment of weight (see Figure 6). 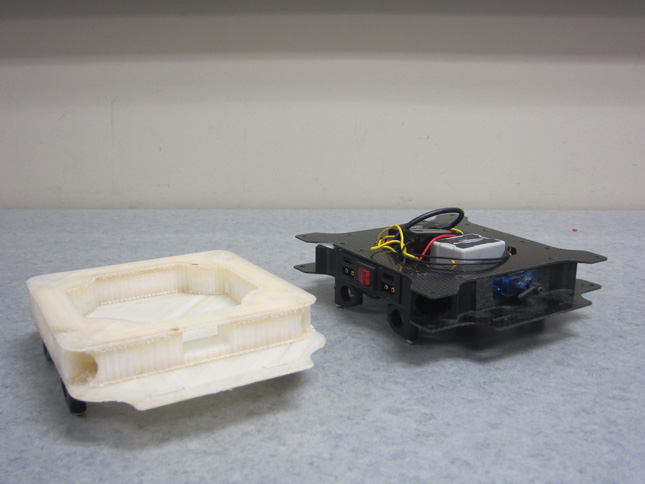 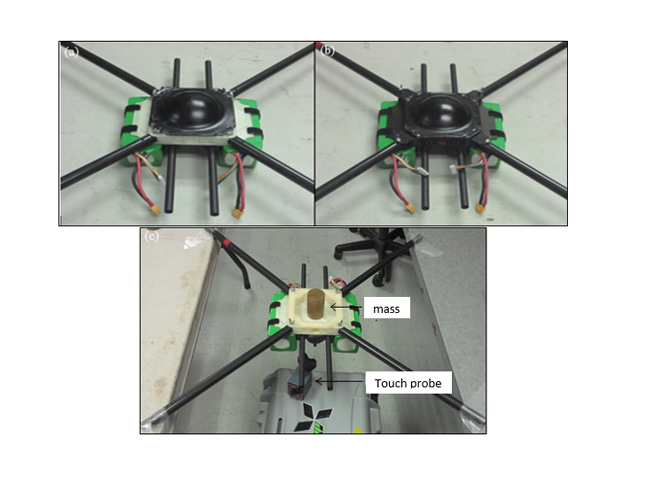 As a result of this analysis, several positive features were brought out regarding the frame assembly:

On the other hand, at a load higher than 60 N, the frame assembly manufactured in this project is less rigid than the current part — up to one and half times less, once the four motors are working at full power (about 80 N).

In an attempt to improve the behavior of the composite frame assembly under extreme conditions, several solutions may be considered:

Triangular nylon filling was at 50% during manufacturing. 100% filling would add further rigidity to the structure for the price of purchasing an additional 16 cm3 of nylon, which corresponds to a 16% increase in nylon content compared to the actual part. It is also possible to increase the number of reinforced layers, which would also increase the rigidity of the part at the expense of a longer printing time and a larger quantity of added material, depending on the desired reinforcement.

The choice of the fiberglass was made because of the attractive ratio resistance/pricing, as well as the possibility of carrying out an isotropic filling. The Mark One machine offers the possibility of using aramid and carbon fibers; these materials may constitute very good choices due to their superior mechanical characteristics compare to glass (especially carbon). However, the manufacturing costs would be inevitably higher.

To maintain a similar printing time while improving mechanical properties, the most realistic solution would be manufacturing the frame assembly with the same number of reinforced layers, but using carbon with a 100% nylon filling.

We would like to acknowledge the support and generosity of the Dronolab student club. With thanks to their Captain, Jonathan Pierrat, and a special thanks to Victor Boutitie for his contribution during this project.