A 3D-Printed Car Completed in Less than 2 Days - By : Substance,

A 3D-Printed Car Completed in Less than 2 Days 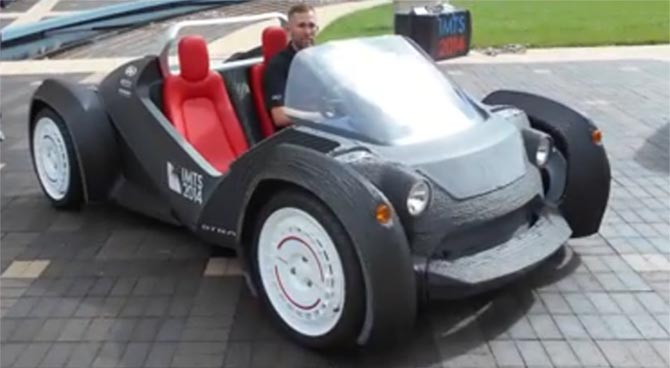 This challenge was met during the IMTS 2014 Week.

Local Motors, an American company met the challenge in 44 hours, live, in front of all the visitors to the “International Technology Manufacturing Show“, in Chicago.

Their Goal? To print, assemble, and drive a 3D printed car on-site, during the IMTS 2014 Week.

The process started with a design competition, for which 207 entries were submitted. The winner was Michele Anoe, an Italian. The Strati was born, which means “layers” in Italian.
The team at Local Motors created, with a giant 3D printer, the forty parts that make up the frame of the vehicle. They subsequently assembled, in two days, the various mechanical elements that are currently impossible to print in 3D (engine, brakes, rear fender, safety bow, etc.). The ultra-fast printer was developed by Cincinnati Inc., in partnership with the Oak Ridge National Laboratory.


The advantage of such a project is to show the enormous benefit in producing 3D printed cars. The Strati vehicle is composed of 40 parts, compared to 2000 parts in a regular car. One of the most important aspects of printing is getting just the right mixture of materials. The large scale printer, that served to print the test pieces of the car, typically prints in carbon fiber (13% to 20%)  and in ABS (80% to 87%), the same type of plastic as LEGOs. Rigidity, tensile strength, and elasticity are all elements that must be taken into consideration when choosing materials for the process of printing. The Strati will be powered by the Renault Twizy electric motor, and will drive up to 125 miles at a top speed of 40 mph.

On Saturday, Sept 13, Jay Rogers, CEO and Co-Founder of Local Motors, and Douglas Woods, President of AMT, drove the newly finished “Strati”in front of the exhibitors at the IMTS 2014.

Local Motors plans to launch production-level 3D-printed vehicles that will be available to the general public for purchase in the next few months. According to the Autonet web site, the price is expected to average between US$ 18,000 and US$ 30,000.