24 hours of innovation: Winners from the 4th edition - By : Substance,

24 hours of innovation: Winners from the 4th edition 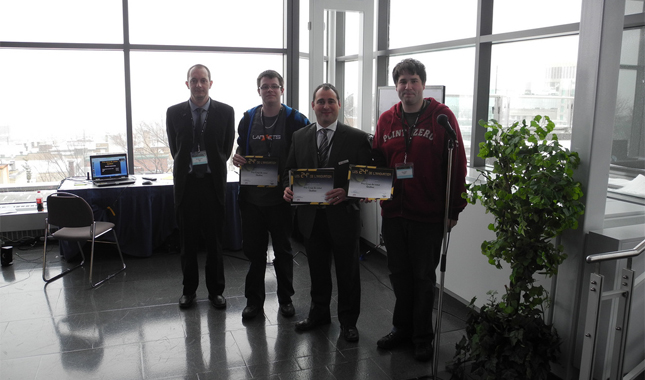 The lead photo shown here was taken when the award was presented by Mr. Mickaël Gardoni, a professor at ÉTS who also organized the event, and Mr. Vincent Dugré, Director of the “Pôle d’excellence québecois en transport terrestre” [Quebec Centre for Excellence in Ground Transportation]. They are pictured awarding a prize to two ÉTS students whose team earned second place in this international contest.

The 24 Hours of Innovation location at the Quebec City Convention Centre.

The 24 Hours of Innovation event was hosted by Montreal’s École de technologie supérieure. It is an international competition open to university students from a variety of disciplines and universities around the world. What is unique about this contest is that it takes place over 24 consecutive hours. The 4th edition of this international event took place at 11 different locations worldwide, starting at 10 a.m. on November 22, 2011. All watches were synchronized and the contest closed just 24 hours later!

Using a crowdsourcing website, all registered teams started by selecting one of the 23 challenges put forward by industry stakeholders or university researchers. After choosing their challenge, they had to get their creative juices flowing and find innovative solutions—within 24 hours! Each team concluded their work by filming a three-minute video summarizing their solution. A local jury at each contest site selected the best local project. These local winners made up the 2011 selection that went on to be evaluated by an international jury. Then, from the “Centre des congrès de Québec” [Quebec City Convention Centre], this jury chose the three best projects of this edition. The winning teams were awarded with grants. 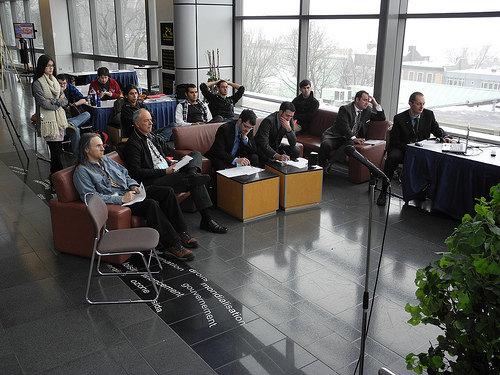 Members of the international jury working with participating students.

More than 300 students participated in this edition, which was led by Mickaël Gardoni, a professor in ÉTS’s Automated Production Engineering department. The project was managed from the Quebec City Convention Centre as part of the “Partenariat Innovation 2011” [Innovation Partnership 2011] an industry show organized by the sponsors of the 4th edition of the 24 Hours of Innovation. These partners included: Pôle d’excellence québecois en transport terrestre, Groupe CTT and Technopôle défense – sécurité. 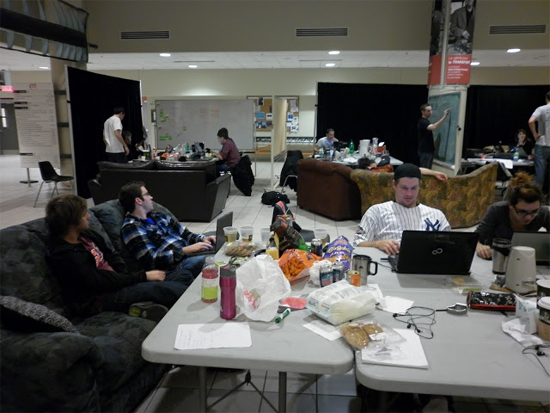 The 4th edition of ÉTS’s 24 Hours of Innovation brought together students from 12 universities in North America, South America, Europe and Africa—and new for 2011, a high school from Reunion Island.

Sites in Canada: Hall from Montreal’s École de technologie supérieure and the Centre des congrès de Québec during the Salon Partenariat Innovation 2011, organized by our sponsors during the 24h.

5 Universities with competition sites in each University

One school, site for the competition

1st Prize: The EstiaZip team from ESTIA in France. They worked on Problem 9, which involved designing a new type of zipper, which was proposed by Groupe CTT from Quebec, Canada. This team also won the local competition in ESTIA. 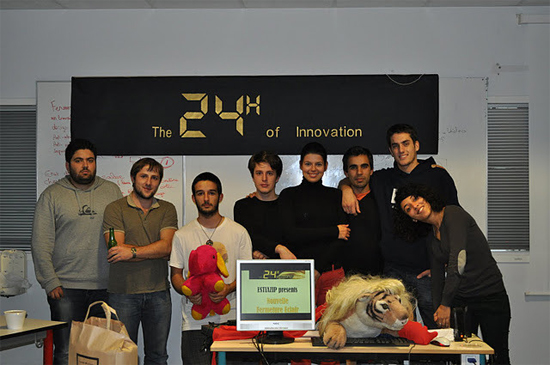 2nd Prize: The ÉTS team, which was made up of two students working from the Paternariat Innovation event and five others located at UTBM in France, as part of a student exchange for the competition. These students worked together—although from a distance—on Problem 12, which involved designing augmented reality 3D glasses suitable for all people, a topic suggested by ISEN Lille.

This team also won the “Our Favourite” award from the City of Quebec and first place at the UTBM local competition.

Working out of UTBM, here are five members of the ÉTS team that won second place. They are pictured with the organizers of the competition at the UTBM location.

3rd Prize: Students from the 1 LLG team from Lycée Lyslet-Geoffroy in Reunion Island. They worked on Problem 13, which involved designing a device that adjusts the angle of sun panels throughout the day in accordance with the sun’s position so that a maximum amount of power is captured. This topic was tabled by the same institution, the Lycée Lislet-Geoffroy.

The winning team from Lycée Lyslet-Geoffroy.

In addition to the three international winners who were part of the eight 2011 finalists presented to the international jury, five other teams won the local contests organized at their respective locations. Here they are: