24 hours of innovation: The international winners from the 7th edition at ÉTS! - By : Substance,

24 hours of innovation: The international winners from the 7th edition at ÉTS!

This article will give you informations regarding the winning teams of this event. You could also see the list and the videos of the international and local winning team on the Agorize site and the list of all the solutions found for each project  again, on the Agorize site. If you are not already registered, you will need to do so for this last aspect (click on “I want to compete“ button to do so). As a member, you will be able to see all the videos done for each challenge by selecting a  challenge, then clicking on the tab “VIDEO” on the challenge page.

The 7th edition of the 24h of innovation organized by the École de technologie supérieure (ETS) in Montreal, was held on 27th  and 28th, May 2014. The event, a concept from ESTIA, was one more time a great success with 1,121 participants enrolled in approximately 177 teams located in 28 sites worldwide, including: 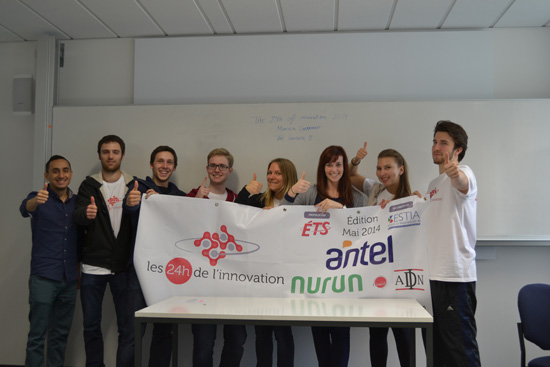 The team from the Technical University of Munich (TUM) in which Edris Hakimzada, Marie-Pier Diotte and Mayer Mathieu Girouard are integrated.

For the third year, the 24 hours of innovation was simultaneously conducted on the site of the International C2MTL Montreal Conference on trade and creativity.

Creativity in action at C2MTL!

This article presents the international winners of this international event. Following shortly, a second paper will present all the proposed solutions for the 19 challenges.

New this year: 21 students from ETS flew around the world to represent the ETS and participate with students from countries targeted sites for the 24h of innovation. To lather their nominations for this role as representatives, students had to prepare a short one-minute video demonstrating their sense of creativity and interest in this event.

In addition, 10 students from universities of Peru, the United States, Germany and Denmark came to experience the 24 hours on site at ETS in Montreal.

International participants and sponsors of the ETS during a visit to Montreal.

All of these participants had a significant cultural experience as they were asked to join students from visited sites and form teams with them to solve one of the 19 challenges proposed by the partners of this event. Thanks to the leaders of various international locations who organized the event on these sites (local to work, participants, logistics) and even accommodation for some pampered!

We met the students of ETS on their return trip: what have they learned from this experience? Fun, giggles galore, a warm welcome, new friends and, following the 24 hours, the chance to discover new horizons … 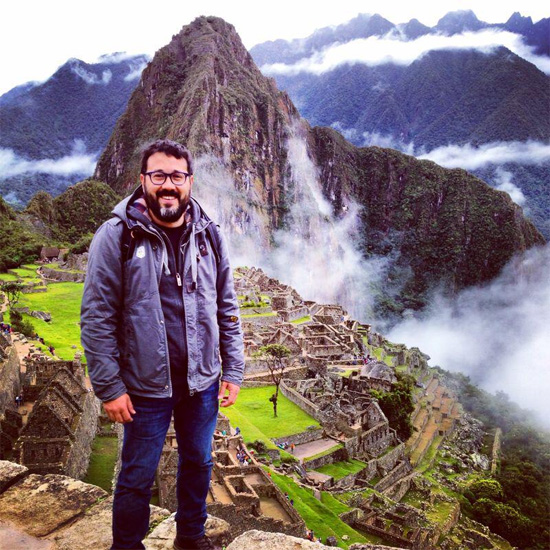 Hanen Garcia from ETS to the discovery of the forgotten sacred city of Machu Picchu, Peru.

For this 7th edition, the website of the event was completely redone in three languages (French, English and Spanish). In addition, the competition also benefited from a new platform “Agorize” offering a virtual and collaborative dedicated to creating innovative challenges workspace. Don’t forget the excitement caused by the 24 hours Facebook site!

A team of the Pontifical Catholic University of Peru (PUCP) including among others Hanan Garcia, Francis Louvel and Benoit Archambault from ETS.

Other novelties: research team of Mickaël Gardoni, the head of 24h at ETS, designed a Montreal “secret recipes” guide available in French, English and Spanish, containing essential data and information for 24 participants, including:

A team from the University of Aarhus in Denmark consisting of Simon Castonguay, Martine Blouin and Bettina Thimot of ETS.

Each team produced a video that lasts about 2 minutes explaining their proposal to solve the problematic chosen from the 19 challenges, thus offering creative solutions. Every local jury chose the three best videos on their website before the end of 24 hours. 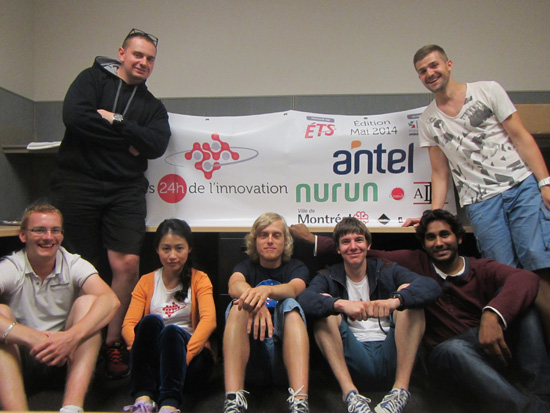 The best video of each site was selected and submitted to an international jury who chose the best 3 videos and the best continental video for North America, South America, Europe, Africa and Asia. As for last year, several teams  chose to be part of “SWAT TEAMS” who agree to work on an imposed challenge. Three special awards were granted to them.

Lorena Escadon, Pierre-Antonie Laine and Guillaume Grillon with their team partners at the University of Montevideo, Uruguay.

The three winning projects of the International Jury

First prize: the West Virginia University in the United States

Imagine, three students from the ETS without 24h experience  (Asmaa Rahali, Mohammad Milad Naderi and Sylvain Dégué), which did not know each others, coordinated by Asmaa, decided to go to West Virginia University in the United States, a new site, to form a team with three participants, Joshua Kurnot, Fares Alblouwy and Kristin Krumenacker who had never heard of the 24h before! How did Asmaa made it? Above all, the team: a game of bowling with his 2 teammates of the ETS to get to know each others. Then a Skype was done before leaving with the ETS participants for West Virginia to get to know each others and then, the Monday before the event, doing activities on the U.S. site. The chemistry was created, add a dash of creativity and this is the result!

Then, who will dare say that inexperienced teams can not win! 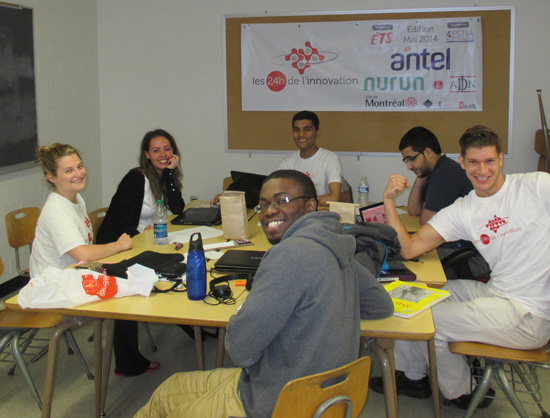 This team won the competition by offering an innovative solution to the challenge # 17: how to make more attractive stairs.

A team of ETS coordinated by Samuel Rispal, founder of the student club DÉCLIQ at ETS, wins the second prize with fellow students of UTSEUS. Team Arc-en-Ciel So-Jump, a SWAT TEAM, has chosen the challenge imposed # 7 seeking to reduce the width of the poles supporting huge circus tents, to propose an innovative solution as explained in this video:

And that‘s not all: the team also won the Asian continent prize  AND the second prize as a SWAT TEAM! 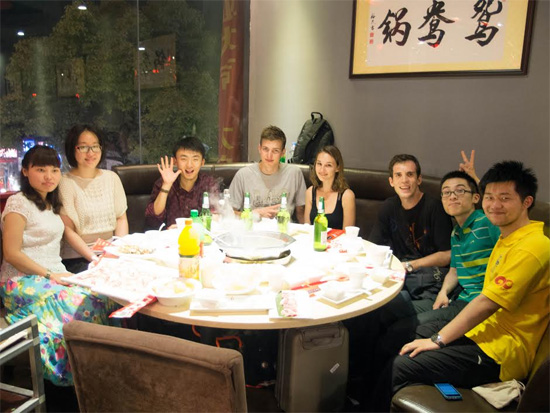 Third Prize: University of Technology of Belfort-Montbéliard (UTBM) in France

The winning projects by continent

Team Double mix of the Graduate School of Engineering of the University Paris–Est Marne-la-Vallée (ESIPE) in France chose Challenge # 10: how to manage diabetes in the future. For their solution, they won the Europe International Award .

Team Red drones from M’Hamed BOUGARA University of Boumerdes (UMBB) in Algeria won the continent of Africa prize for the proposed solution to the challenge # 2: how to have a clean neighborhood.

The first SWAT TEAM prize was won by the team “Error404GroupNotFound” from the University M’Hamed BOUGARA Boumerdes (UMBB) in Algeria. Those students have accepted the imposed challenge  # 8: How to increase the number of spectators inside a circus canvas. Here is their solution:

As mentioned previously, the team Arc-en-Ciel So-Jump from the University of Sino-European Technology Shanghai University (UTSEUS) China won the SWAT TEAM second prize  for their solution to challenge # 7 and also earned the second international prize (see above) and the Asian continental prize.

SWAT TEAM third prize was awarded to the team Victorious from a university located in Bogota, Colombia. The team worked on the challenge imposed # 7 to reduce the width of the poles supporting huge circus tents. Here is the video:

And local winners of the competition are …

You will find the winners established by the local jury at the following link.