The 24 Hours of Innovation, an Insider’s Perspective - By : Andree Harvey,

The 24 Hours of Innovation, an Insider’s Perspective 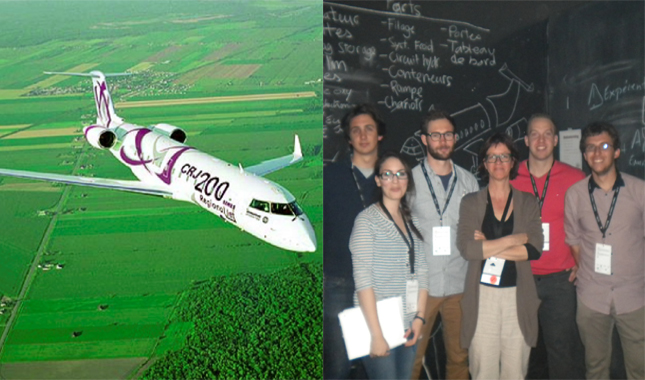 Header image  from the author and the 24h of innovation organization.

In May 2013, I had the privilege of participating in the 24 Hours of Innovation, an international competition organized by ÉTS in which students from around the world have to find creative solutions to problems presented by businesses.

My team was called “QF Connection” (for Quebec-France Connection, as the team was made up of people from Quebec and France). The team members included ÉTS students Yohann Hernandez, Fred Scherer, Jean-Philip Poulin, Maria Ramoul and Charles Vanelslande. Abdelaziz El-mohri also joined our group, working with us remotely.

Here’s the story of our epic experience, told hour by hour.

Yohann Hernandez, who had participated in the 2012 edition of the competition, created a private Facebook group on April 9 and sent out an invitation: “Who wants to participate in the 24 Hours of Innovation with me?” Nine people responded and a discussion ensued. Who would do the 2D graphic design? The video editing? Who would bring what? We needed colour Post-Its, pencils, computers, a video camera and a regular camera.

Our first in-person meeting was held at the ÉTS cafeteria. It was a chance for us to get to know one another and iron out more details. Of the nine people originally recruited, seven decided to embark on the adventure.

Yohann led the meeting. Since it was his second time participating in the contest, he wanted to share his past experience with us. “Last year, my team wasted far too much time choosing a challenge and then coming up with ideas.” Yohann hoped that in trying again in 2013, he would be able to improve his performance. His goal was nothing short of leading a team to victory!

Thus, the schedule for the day of the competition was carefully planned. This is how we planned to use our time:

1. Spend a maximum of one hour discussing the challenges and choosing one;
2. Complete the ideation period by noon, at latest;
3. Create the 3D modelling and video script from 12 p.m. to 6 p.m.;
4. Start making the video at 6 p.m., at latest. Aim to complete the video by midnight. 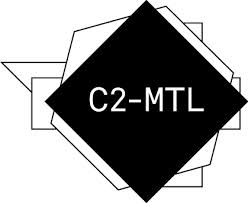 We meet up at the Arsenal, where C2MTL, the mecca of creativity, is taking place. For the second year in a row, the site offers a designated work space for one of the teams participating in the 24 Hours of Innovation (the other teams are working in ÉTS’ atrium).

We were anxious when we headed into the space that would be our creative environment for the next 24 hours. And there was a surprise waiting for us! The walls were painted black so that we could write on them with chalk, and the seats were turquoise and lime-coloured cardboard cubes. It looked like a games room! We reorganized the space to get more comfortable and set ourselves up properly. Pencils and coloured Post-Its were spread across the table, laptops were plugged in. We were ready! 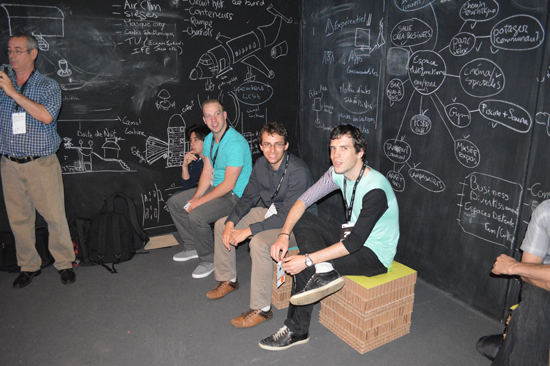 9 a.m.: The challenges are unveiled

Professor Mickaël Gardoni, the head organizer of the competition, initiates a video conference to announce the challenges proposed by approximately 15 businesses. The topics are extremely varied, ranging from creating a green pergola to designing a mobile application for pregnant women. 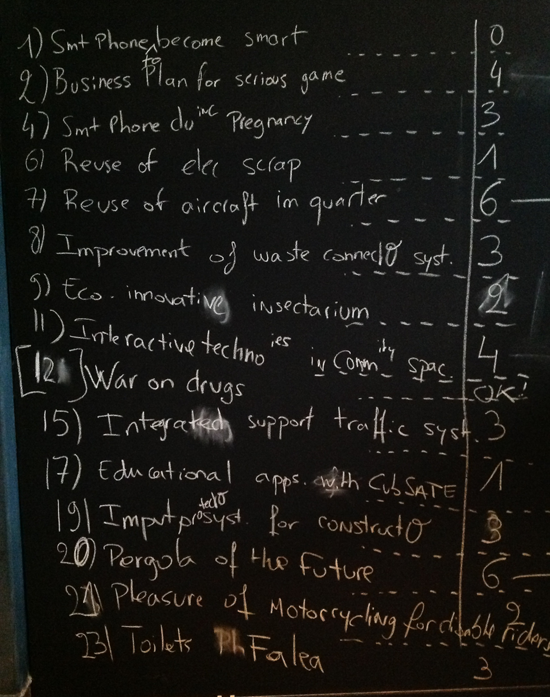 We took the time to analyze each of the challenges and to perform some online research. Once all the team members were ready, we proceeded to a vote. We ended up choosing the submission from Bombardier: “Using an old Bombardier aircraft, reuse as many parts as possible to create urban installations in the Innovation District.” Our task would be recover old aircraft components and use them to make urban installations in Montreal’s Innovation District, where ÉTS is located. 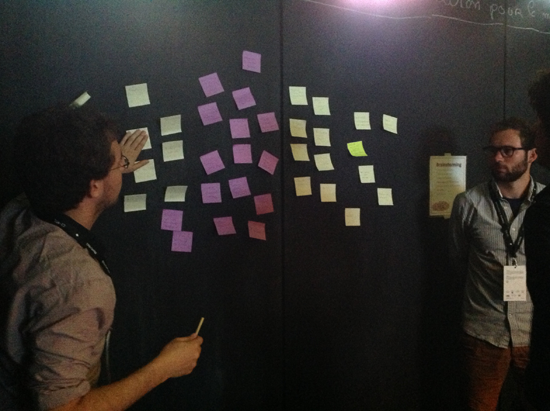 Yohann declares the brainstorming session officially open. Our brainstorming rules are taped to the wall as a reminder to us all.

I suggest the Post-It storm approach. Each participant writes as many ideas as possible—one on each Post-It—for a 10-minute period. When time is up, we take turns sticking our Post-Its to the wall and explaining our ideas to the group. My proposal is accepted unanimously. Go!

Once all our Post-Its are up and our ideas have been presented, the group categorizes the ideas by theme. Three main themes become evident: Urban furniture, public spaces and technical aspects.

Some group members (those with better concept-development skills) get to work sketching a multi-purpose space, while others (the more technical folks) produce drawings of the aircraft parts. 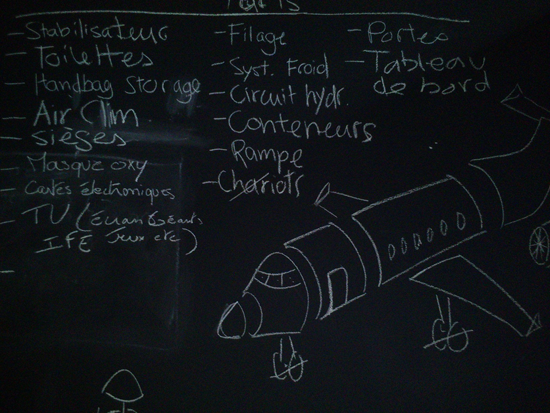 2 p.m.: Putting ourselves in the users’ shoes

The group decides to change our perspective for a moment and envision two different people enjoying the space: the first is a single 32-year old woman who lives in the neighbourhood and the second is a 40-year old man who works in the area. We try to think of what they do morning, noon and night (including cocktail hour) and we plot it all on the blackboard. We call the scenario “A Day in the Life of…”

With this work complete, we try to link the different steps in the scenario to the ideas we have categorized by theme and the various parts of an aircraft. For example, the seats from the plane will be used in a movie theatre, the wings will act as the foundation for a community garden, the cabin will be cut in half and used to create a patio environment, etc.

Tasks are assigned to various team members. While Yohann and I create the video screenplay and script, Fred, Charles and Maria sketch the sequenced plans, and Philip produces the 3D images.

Since we don’t have a graphic designer on our team, Abdelaziz El-mohri, a friend of Maria’s, is called in for assistance. He produces the artwork from Algeria.

The clock strikes twelve, and the video is still not finished. We work into the wee hours of the night refining the text, recording the narration (Maria volunteers for this) and to edit the video.

Three hours off our planned schedule (we were aiming to finish by midnight), we call it a wrap and entitle our work “A Day in the Sky.

Team members head home to get some rest and a bite to eat before the announcement of the results, which will take place in just a few hours. 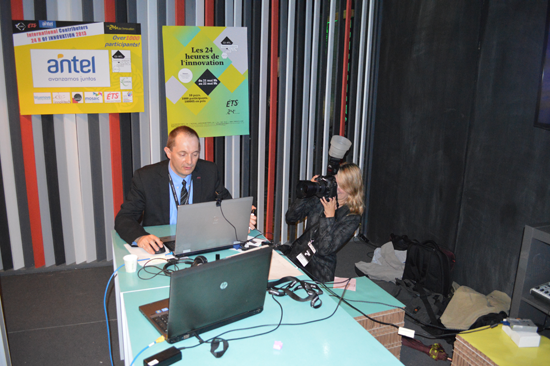 The participants meet up once again at Arsenal, where the international panel of judges will announce the winners of the competition. Their decision is based on five criteria, for a total of 100 points: Analysis of scientific and technical information (30 points); innovation and creativity (30 points); quality of the presentation (20 points); environmental responsibility (20 points).

QF Connection ranks first among the teams from Montreal! However, the team doesn’t earn one of the top three international awards. 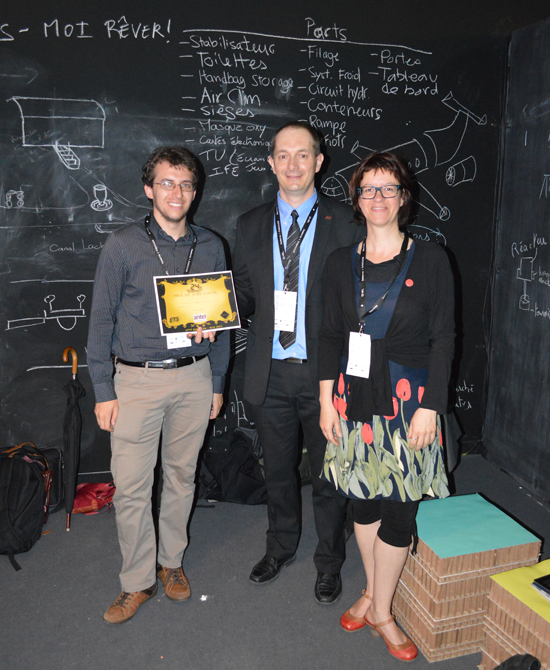 In the days that follow, the group hypothesizes on our final ranking. “I think we lost points for environmental responsibility and the clarity of the presentation,” I said. “The winning ideas were the simplest ones,” observed Yohann. Fred reminded us of a rule that he learned during a knowledge management course on innovation given by Professor Mickaël Gardoni: “The leading teams usually spend 10 to 12 hours working on a dozen ideas before narrowing it down to the best idea.”

The last word was Yohann’s: “I am definitely game for participating a third time. I want to win first place at ÉTS and worldwide!” We wish him the best of luck.