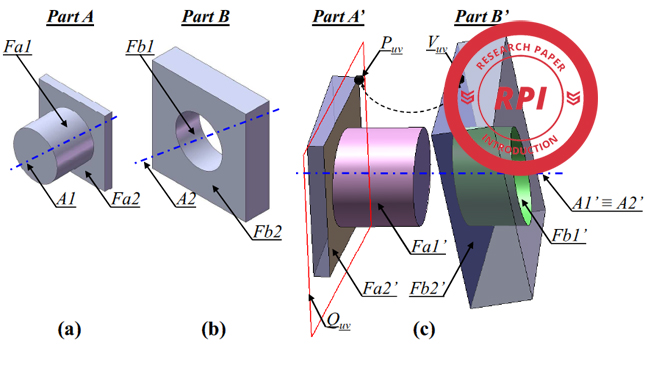 In CAD models, the tolerances are represented as annotations. In fact, the numerical model is used in the nominal configuration. The values of the dimensional and geometrical tolerances do not have any impact on CAD models or the results of numerical simulations. Research asserts that the tolerance stack-up has an impact on the Finite Element (FE) results [1] and the assembly process [2], as is the case with sheet metal assembly [3]. Thus, a realistic modeling of the assembly, which considers the geometrical and dimensional tolerances on CAD models, is a very real industrial need. In this paper, a method of modelling realistic assembly (variational assembly) is presented. This new method allows for tolerance analysis while considering assembly process planning, contact types and assembly motion.

In this paper, the components with dimensional and geometrical tolerances are modeled in CAD models by using two algorithms to respect the principle of independence (ISO 8015):

In nominal assembly, the ideal components are linked by mating constraints. The replacement of those components by the realistic ones requires the updating of mating constraints. A tolerance analysis is performed by using the proposed method and showed through the crankshaft system (fig. 1). The proposed analysis method takes into account not only part deviations but also assembly process planning and contact types between parts. In addition, the impact of the tolerance stack-up on the functional requirement in a dynamic environment can be determined.

The literature review relates two aspects. The first aspect consists of tolerance analysis and synthesis [5, 7 -24]. The second aspect consists of the variational geometry and the redefinition of assembly mating constraints [30, 33-38].
In most of the references cited, the tolerance analysis and syntheses are based on the spatial math representations (polyhedral and Technical Manual Application System (T-Maps)) or mathematical model. The solutions for the tolerance analysis and syntheses, which are presented in mathematical form (equations), are modeled in a geometrical solution. The spatial math models (polyhedral and T-Maps) are difficult tools to use in industry as this model does not predict the impact of dimensional and geometrical deviation, permitted by tolerances, on assembly deformations. The proposed model in this paper is considered a tool for visualization and tolerance impact analysis (interference detection) in assembly simulation cases. The second aspect addressed in the literature appears to be closest to this work [30, 33-38]. Indeed, we can learn a great deal from the methods used in this second aspect. The later can be applied to solve some issues of the problem as contemplated: The parametric variational features is used to generate realistic assembly.

The approach presented in this paper is an extension of these works. The realistic modeling of components allows us to take into account the tolerances in CAD models. The redefinition of mating constraints leads us to consider the relationships between realistic components and the assembly process planning. The realistic assembly modeling in a CAD environment allows for direct use of computation applications which already exist in CAD software as assembly motion simulations.

Modeling of a realistic component with dimensional defects 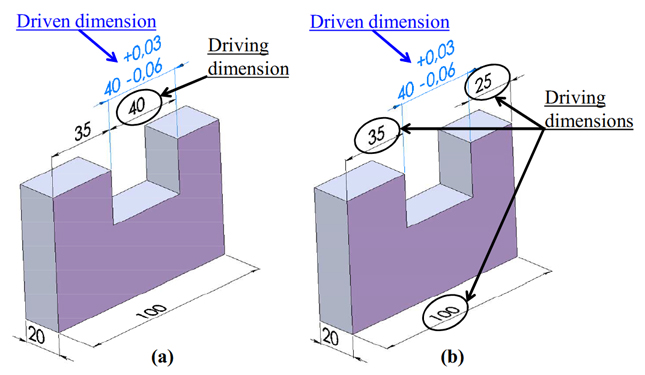 Modeling of a realistic component with geometrical defects

The deviation between the nominal and the realistic feature is determined by the Small Displacement Torsors (SDT) tool. Then, the assumption of neglecting the form defects relative to the position and orientation defects is used. The deviation torsor, which is based on a SDT tool, defines the Degrees of Freedom (DoFs) of the toleranced feature. In the proposed model, the deviation parameters between the nominal and realistic features are determined by an analogy to the parameters defined by the SDT. Sub-algorithms are developed to obtain realistic configurations of a planar face or a cylindrical axis subjected to a positional and/or orientation tolerance, as the case of planar face subjected to a positional tolerance (Fig. 3). In a CAD model, the realistic part configurations are generated with face displacements: Rotation and/or translation using the parameters deduced from the discretization. In the proposed methodology, the original shape of the feature is conserved as the planar faces remain planar. The algorithm starts by identifying toleranced features, tolerance types and datum references, which are specified by ISO standards.

Redefinition of the assembly mating constraints

In the realistic assembly, these mating constraints must be redefined. These realistic mating constraints are obtained by modifications of the relations between Minimum Geometrical Reference Elements (MGREs). This method depends on the Objective Function of the Assembly (OFA) specified by the designer. In CAD software, the OFA is automatically deduced from the nominal model:

In this paper, a model for the integration of dimensional and geometrical tolerances in CAD models is presented: the components with defects are automatically obtained according to the tolerances and a new method to redefine mating constraints according to the OFA is established.

The developed model is a tool for tolerance analysis while considering the assembly process planning and the various types of contact between parts. The tolerance integration allows us to use the DMU in a realistic configuration. The tolerance impacts on the results of the F.E. calculation or the dynamic computation can be performed.

Future research will focus on the consideration of form defects on CAD model through another type of tolerancing approach. In addition, a modeling of the realistic assemblies according to statistical tolerancing can be obtained.